I found the marriage certificate for Emmanuel de Guehery and Marion Cuthbert, my great-great-grandparents. Both are from Chalk River. Emmanuel was born in Waterloo County, Ontario and was a fireman for the railroad. His parents were Rudolph and Goddlikin de Guehery. Marion was born in London, England. Her parents were Thomas and Margaret Cuthbert. Their marriage was 25 February 1884 in Pembroke. They were Presbyterian.

Now, things are a little different. My dad is still full Italian. So that 1/2 is intact. My mom's side is a bit more complex now.

My maternal grandmother is a Wilson and Cruice. I now know that Wilson side is probably "Scotch-Irish" since census records list Samuel Wilson's parents as being from Belfast and since Samuel Wilson listed his religion as Presbyterian on his marriage record. The origins of the Scotch-Irish lie primarily in northern England and the lowlands of Scotland. They came to Northern Ireland in the 1600s. According to lore, the Cruice family escaped the French Revolution to Ireland. While we considered that part of the family "French", given that Patrick Cruice's wife is Bridget Sweeney, and given that Patrick Cruice's mother appears to be Mary Golden, both decidedly non-French last name, it seems likely that the Cruice side is more like 1/4 French and 3/4 Irish.

My paternal grandfather is a Burke and de Guehery. The Burke family is Catholic Irish, but we don't know what the Brady family is (Anthony Burke married Maria Brady), but we'll list her as Irish until we know more. We now know more of the history of the de Guehery family. Margaret de Guehery's mother was Marion Cuthbert, who was Scottish. Her father was Emmanuel de Guehery, who was 1/2 French and 1/2 German.

So that makes me: 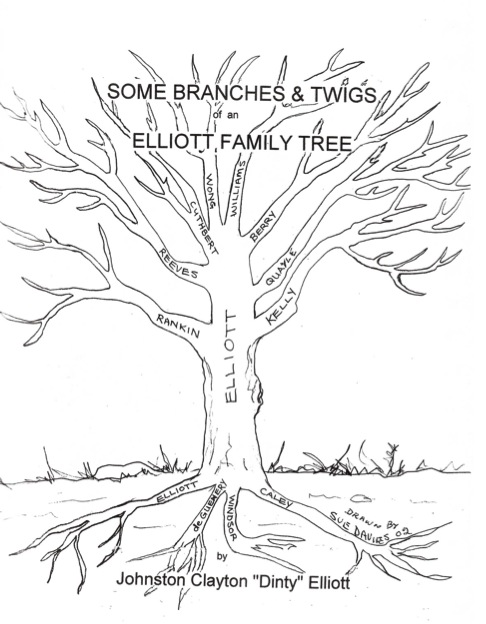 I made contact with the gentleman who posted the snippet about the de Guehery family 20 years ago.

Ten years ago he wrote a family history called “Some Branches and Twigs of the Elliott Family Tree”, which is on file in the OGS archives in Toronto. His mother, Edna Mae de Geuhery, was the sister of my great-grandmother, Margaret Ogilvie de Guehery. His book has a chapter on the de Guehery family and another chapter on the Cuthbert family (Margaret and Edna Mae's mother was Marion Cuthbert).

He is going to send me the chapters soon.

He also put me in touch with another cousin and this is where it gets even cooler.

His grandfather did a lot of genealogical research in the early 1930s with the genealogy research division at the library in Dresden before that institution was destroyed during WWII. His father continued this research during the 1980's with genealogical researchers in Paris. Apparently, the family tree is complete in detail back to the mid-1700s.

The story includes the de Guehery family's escape from the French Revolution, a beheading, and the loss of a noble title.

I can't wait to get more information.

My mother's father, my grandfather, was Donald Burke. His father, Arthur Burke, was Irish. His mother, Margaret De Guehery, was French.

Or so we thought.

For my initial pass at filling in our family tree, it was a treasure hunt whenever I poked around on ancestry.com, hitting the jackpot whenever I found a distant cousin researching part of my family tree. But as I grew more serious about genealogy, I wanted to make sure that any distant cousins I might find were as serious as I am about documenting records. So now I contact them directly. Some never respond. Many have. Now I have a small network of distant family sharing finds and working on the same problems.

One of these distant cousins is related to Margaret De Guehery.

I knew that Margaret's parents were Emanual de Guehery and Marion Cuthbert. I even had some very old pictures of Marion from my aunt. A search on familysearch.org had revealed their marriage record in Ontario, with Rudolph and Goddlibien de Guehery and Thomas and Margaret Cuthbert listed as their parents.

I also knew that the de Gueherys and Cuthberts had lived in Chalk River, Ontario, both from our own family history, and from the familysearch.org records I found.

What I didn't know was that the Cuthberts were Scottish.

At some point in my search a few years, I had found a Marion Cuthbert in England but rejected that as nothing more than a false alarm.

Well, my fourth cousin had discovered that both Thomas and Margaret Cuthbert had both been born in Scotland. Thomas in Bathgate. Margaret in Glasgow. At the same time, someone in the Upper Ottawa Valley Genealogical Group found Margaret's obituary in a search of their records for me, confirming that Margaret Ogilvy (Downie) Cuthbert had died at age 80 and that she was born in Glasgow, Scotland.

The family had moved to London, England, where Marion and some of her siblings were born. So my find from a few years ago was spot on.

We're Scottish. A small part Scottish, to be sure. After all, it's only my great-great-grandmother who is Scottish. But that's still 1/16.

He is a descendant of the gentleman at the left of the photo below, William Cuthbert, Margaret's son and Marions' brother. William took over the Cuthbert farm. What's kind of cool is that my cousin just recently bought the farm for himself and his family. 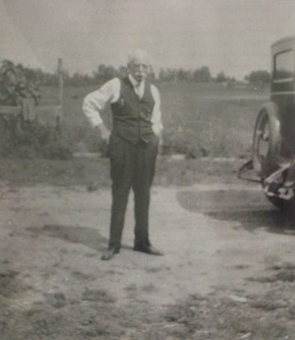 The very first step in any genealogy project is to ask your parents and grandparents for any information.

Sadly, most of my grandparents were deceased when I started this, and the only one still living was in a nursing home. I remember putting together a basic genealogy when I was in school. I talked with my great-grandmother and she gave me the names of her parents and some of her grandparents. Like many school projects, that's long gone.

My dad said his father's parents were Angelo and Maria Palmeri, but did not know Maria's last name. I might have met one of them when I was little, but I don't remember.

My mom knew that there was something like a Cruice and a de Guehery, but wasn't quite sure how to spell the names, or who went with whom, so she had me get in touch with one of my aunts, who was the family historian. She sent me this family tree with another couple of pages with some of the birth and death dates.

After spending most of my efforts working on and off on digitizing and adding to my wife's genealogy, I used this as a starting point for uncovering my own.

Based on what we knew then, I was 1/2 Italian, 1/4 French, and 1/4 Irish. My mom's parents were both 1/2 French and 1/2 Irish. According to family lore, both French families fled the French Revolution, with the Cruice's escaping to Ireland and then to the US, and the de Guehery's escaping to Germany, then to Canada, and then to the US.