I had emailed some churches looking for my grandparents' marriage certificate. Someone at one of the churches I wrote actually did some research for me – finding a bunch of things out I already knew, but it was really generous of them to do the searches. One things they found that I didn't have was my great-grandparents' obituaries from one of the Buffalo newspapers.

The one thing these list is names (including married names) of siblings. I had them for my great-grandmother's siblings, but I didn't have them all for my great-grandfather's siblings, and I wasn't sure how many siblings he even had. Turns out a couple I thought were his sisters must have been cousins. They immigrated with my great-grandparents, listing right before them on the Ellis Island manifest, but they were either his cousins or nieces or something. 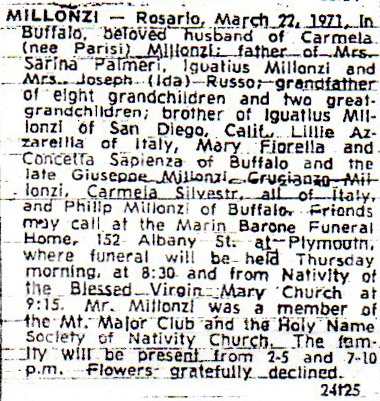 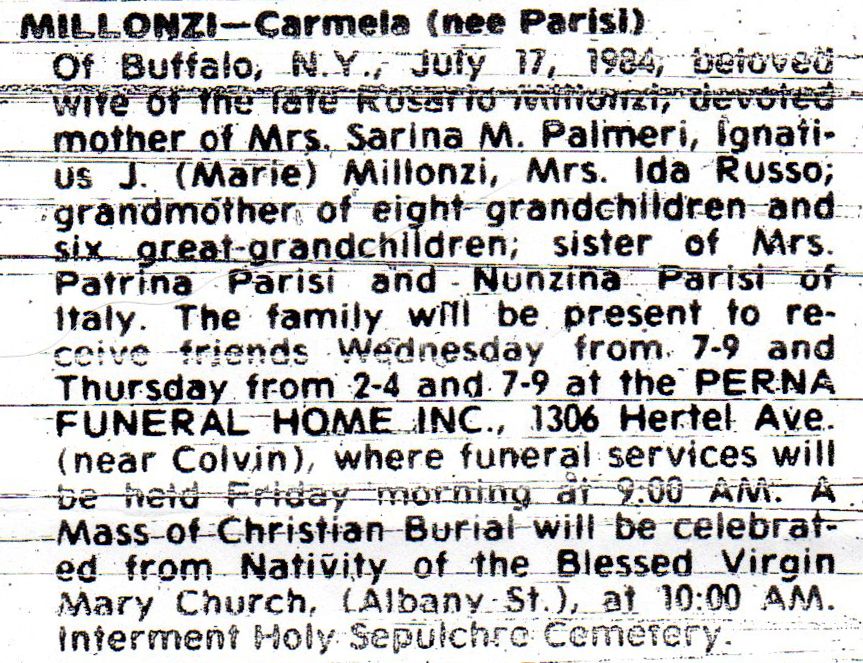 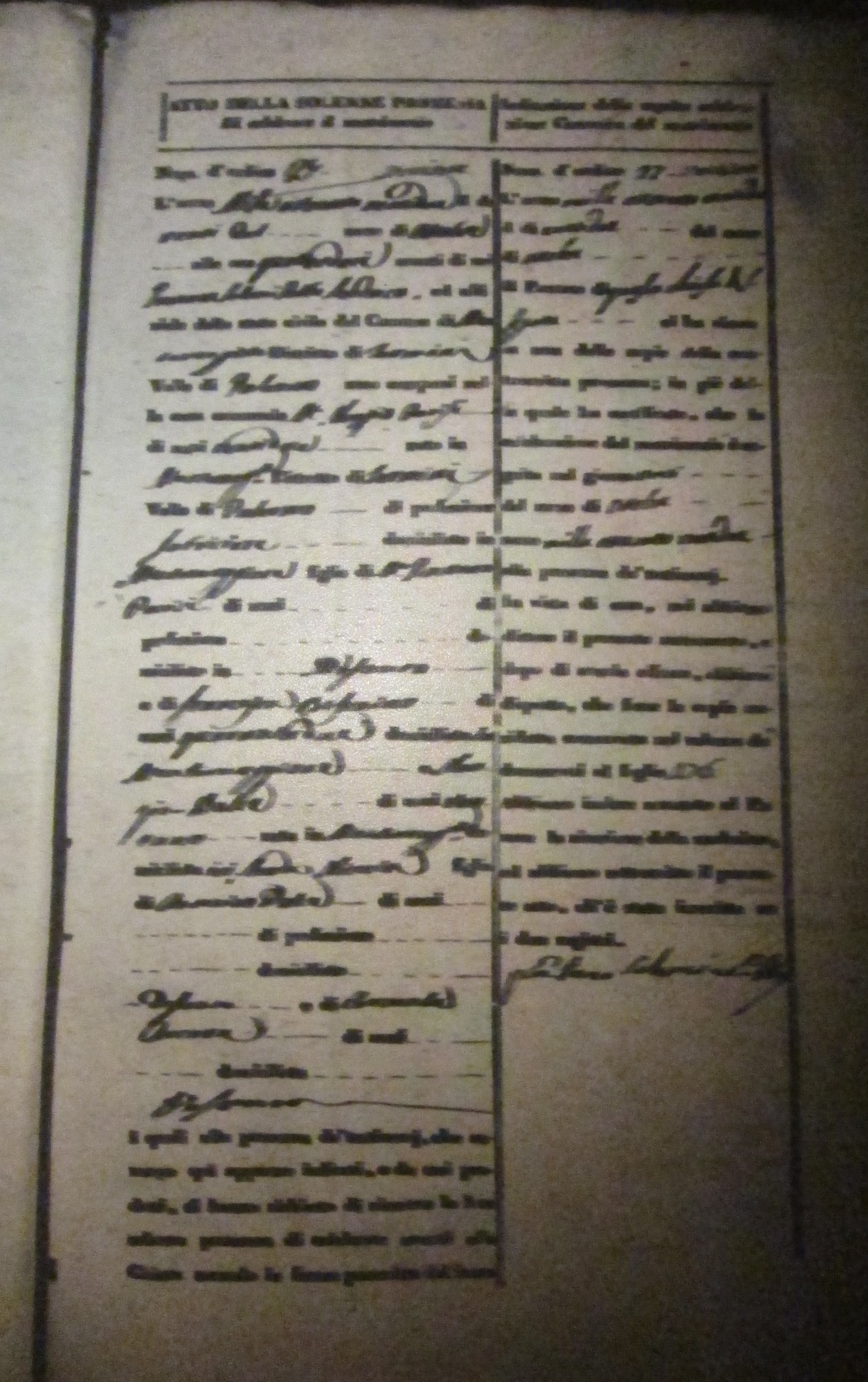 marriage of Nunzio Parisi and Nunzia Dolce, 1822 in Montemaggiore Belsito

My grandmother's cousin from Montemaggiore Belsito sent me a copy of the Parisi genealogy going back to the early 1800s. This will help make sense of my searches of the Montemaggiore records. One thing this really helped me on was the fact that my great-great-grandmother, Agata Sciolino, married one brother, Rosario Parisi, and then married another brother Angelo Parisi.

My grandmother is Sarina Millonzi Palmeri and my great-grandmother is Carmela Parisi (daughter of Angelo Parisi and Agata Sciolino). 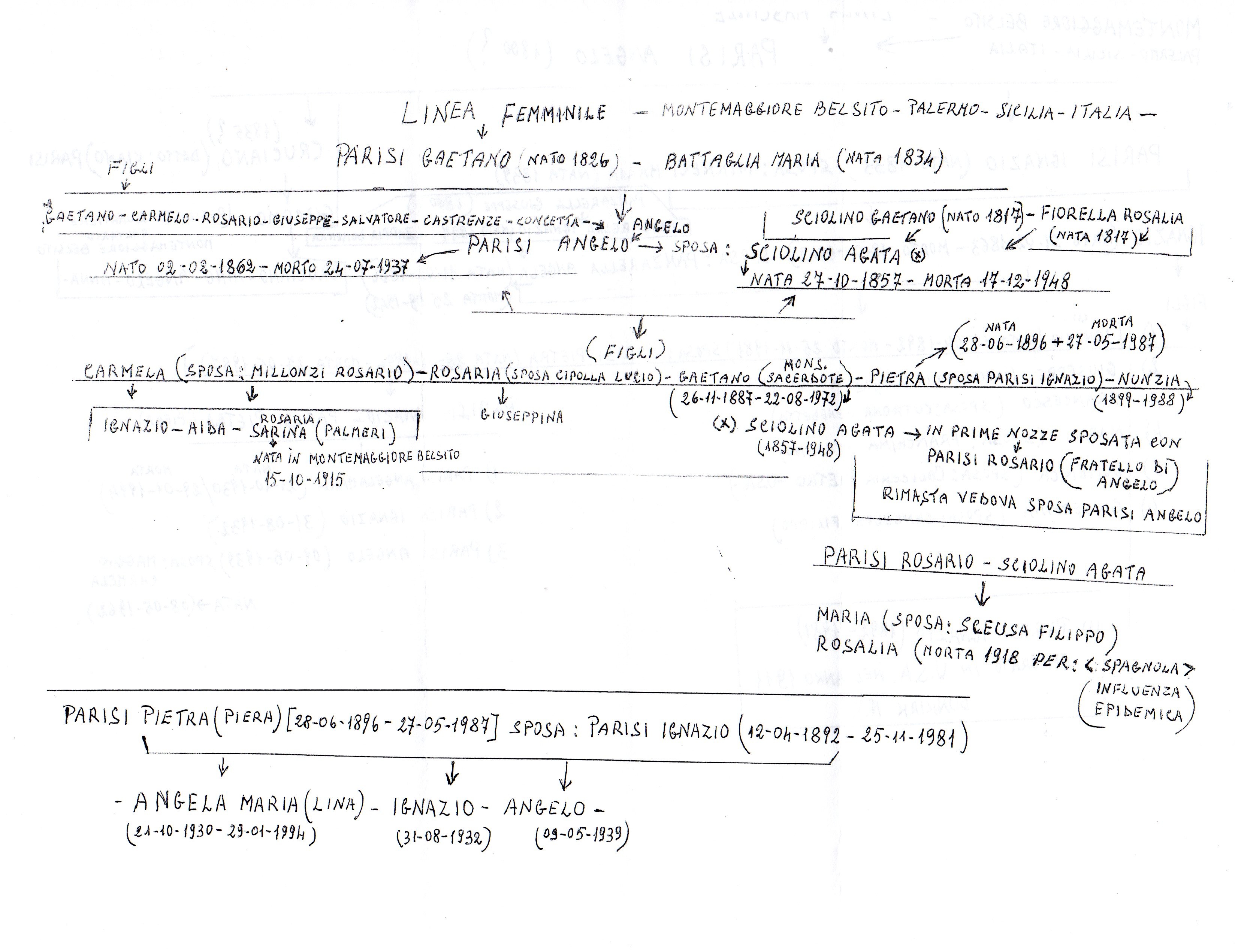 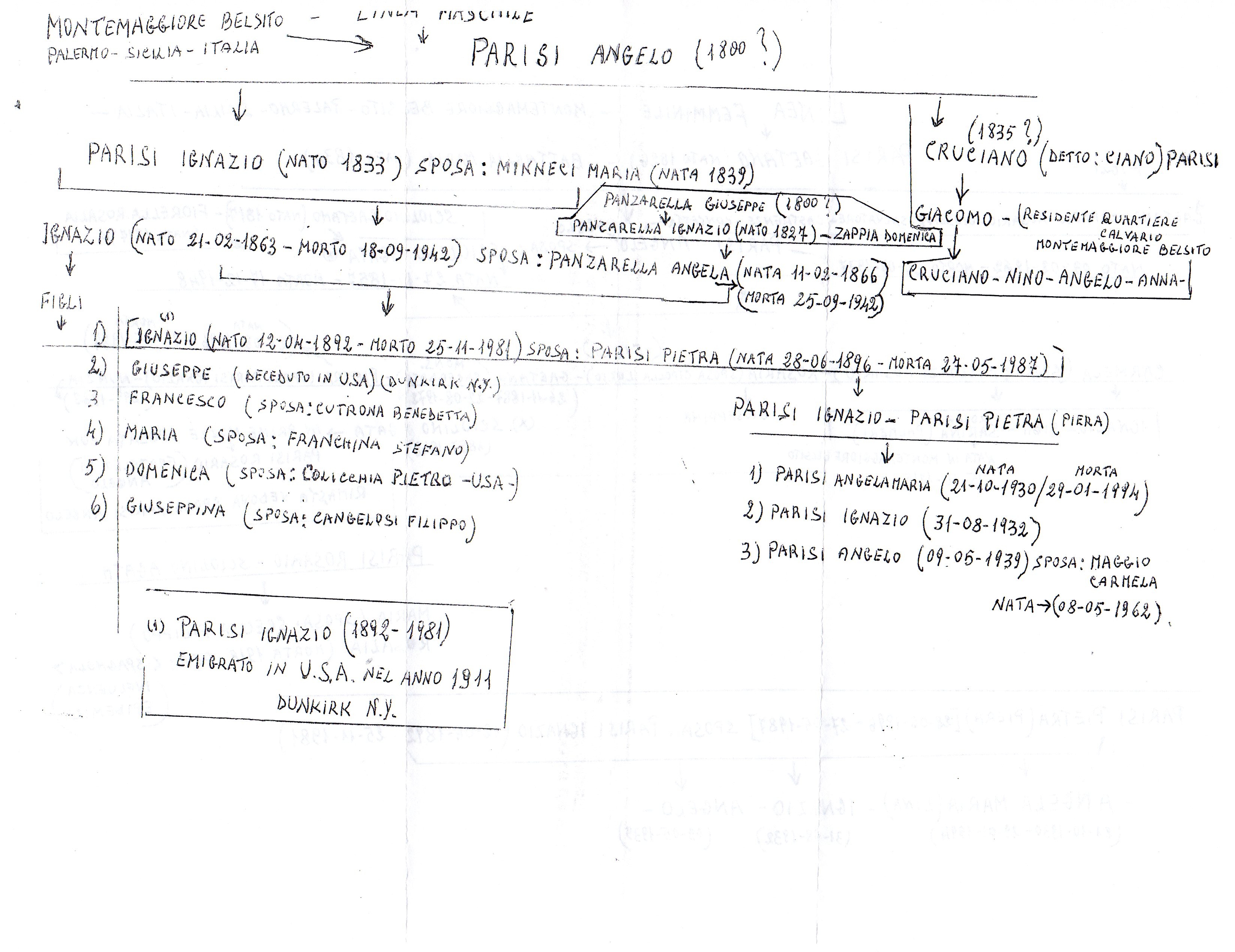 Now, things are a little different. My dad is still full Italian. So that 1/2 is intact. My mom's side is a bit more complex now.

My maternal grandmother is a Wilson and Cruice. I now know that Wilson side is probably "Scotch-Irish" since census records list Samuel Wilson's parents as being from Belfast and since Samuel Wilson listed his religion as Presbyterian on his marriage record. The origins of the Scotch-Irish lie primarily in northern England and the lowlands of Scotland. They came to Northern Ireland in the 1600s. According to lore, the Cruice family escaped the French Revolution to Ireland. While we considered that part of the family "French", given that Patrick Cruice's wife is Bridget Sweeney, and given that Patrick Cruice's mother appears to be Mary Golden, both decidedly non-French last name, it seems likely that the Cruice side is more like 1/4 French and 3/4 Irish.

My paternal grandfather is a Burke and de Guehery. The Burke family is Catholic Irish, but we don't know what the Brady family is (Anthony Burke married Maria Brady), but we'll list her as Irish until we know more. We now know more of the history of the de Guehery family. Margaret de Guehery's mother was Marion Cuthbert, who was Scottish. Her father was Emmanuel de Guehery, who was 1/2 French and 1/2 German.

So that makes me:

The first step was to figure out where to ask for them. I found several places online that suggested sending requests to the Ufficio dello Stato Civile in the town that the ancestros were born. I was able to find the mailing address in Montemaggiore Belsito for my grandmother and in Serradifalco for my great-grandmother.

The next step was to figure out how to make the request in Italian. Io capisco un po l'italiano. So I needed help. I tried google translate (http://translate.google.com/). To check the quality of the translation, after I translated a sentence from English to Italian, I back-translated the result from Italian to English.

This is what I produced. It says that I need a birth certificate for Rosaria (Sarina) Millonzi, who was born in Montemaggiore Belsito. It gives her birth date and names her parents, Rosario Millonzi and Carmela Parisi. It does ask for them in long form, "formato internazionale" or "estratto per riassunto", just to be safe. It says I will be willing to pay for the processing and shipping. I included a 5 Euro note because we had some Euros in the house from my last trip to Europe. Maybe that'll pay for the shipping. Or it will be a tip for the clerk. If it works and I get the birth certificates, it will be money well spent.

Hopefully this will all work.

My great-grandmother, Carmela Parisi Millonzi, was born in Montemaggiore Belsito, Province of Palermo, Sicily on 2 Sep 1892. Her parents were Angelo Parisi and Agata Maria Sciolino.

Here is her birth certificate, which I found on a microfilm I ordered through a local Family Research Center at an LDS church in Madison, TN, just north of Nashville. Thankfully, the LDS church records and their microfilm readers are open to anyone. The FRC in Madison is open only a few hours a week, which requires a bit of flexibility to find a time that works for me. Ordering is easy. You pay $6 per microfilm and it arrives in about 2 weeks. You can keep it for about 3 weeks, but they often let them linger for a week or two longer. From what I understand, they are moving the ordering process online (new.familysearch.org) which should make things even easier. 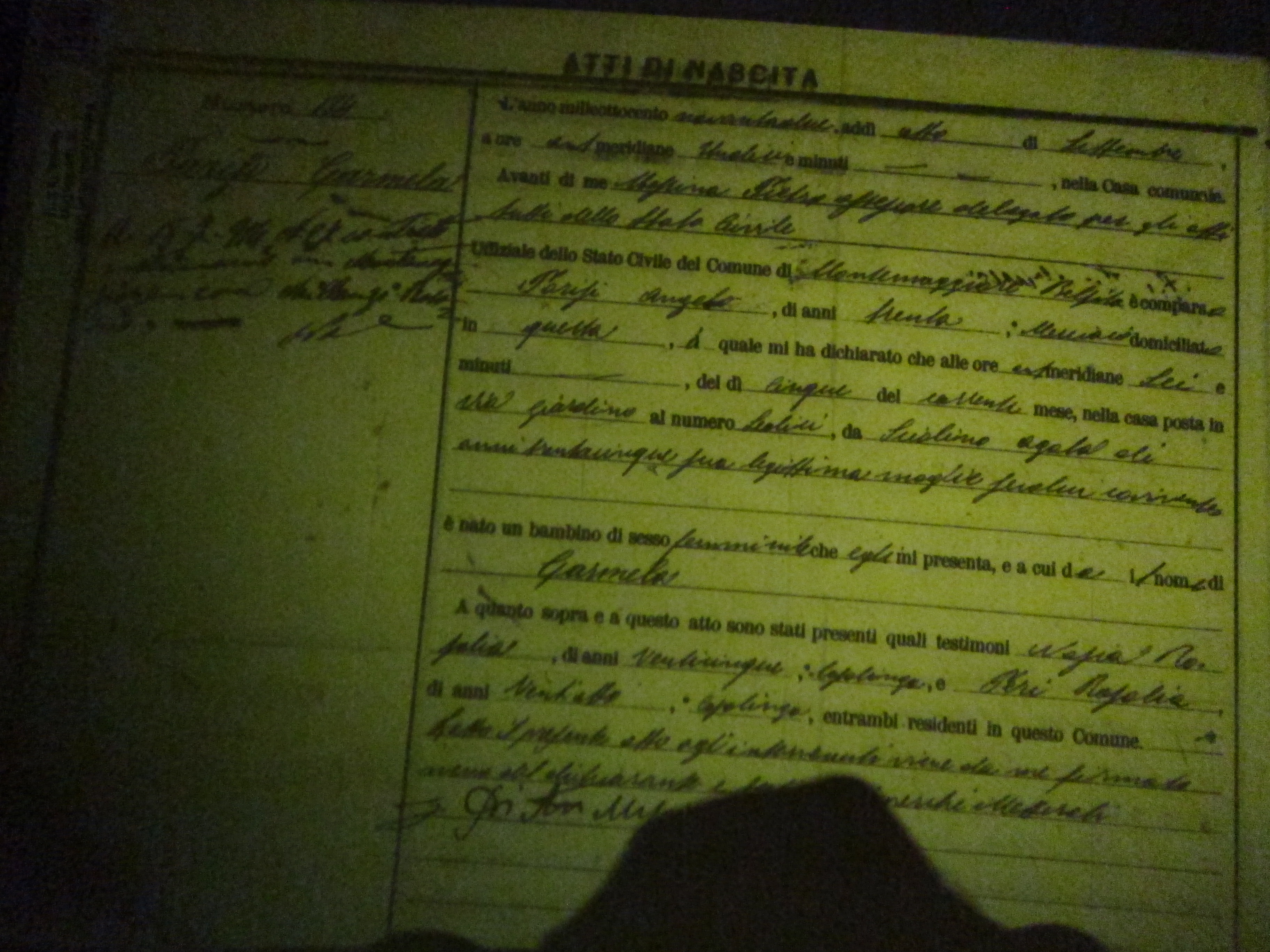 Transcribing these is the tricky part.

First, they're in Italian. I can read only a tiny tiny bit of Italian (but I'm learning). So Google translate is my tool of choice.

Second, they are written in a fairly stylized cursive handwriting. It does take a bit of calibrating to read the text. For example, in "Parisi" the central "s" almost looks like a cursive "f". I've found that after reading them for a while, I can start to pick up on the style. One nice thing is that all the records in a volume are written by the same hand in a very consistent style. Some of those styles are easier than others, to be sure.

Here is my loose translation of the Atti di Nasciti. I haven't been able to figure it all out. But I've been able to pull out what seems to be the most salient information. After I used Google translate I also found some places online where others had translated similar Italian documents (including this http://www.conigliofamily.com/Pa.htm). Unfortunately, google translate doesn't suggest words when there are misspellings.

In the top left corner it gives the birth number for that year and notes Parisi Carmela. I can't read the writing underneath.