Thomas Cuthbert and Margaret Downie were my great-great-great-grandparents from Scotland (those would be my mother's father's mother's mother's parents). A fellow Downie descendant – himself an actual Downie – stumbled across my web site and we had a bit of an email correspondence. He seemed to have far more genealogical experience than I do so I valued his comment and suggestions.

I have a marriage record that lists them being married 8 Sep 1816 in Stirling Parish. He had them married 7 Sep 1816 in Old Monkland, Lanarkshire. Now, the record I had listed Jean McMicken as Airdrie. And checking online, it looks like Old Monkland encompassed areas in and around Airdrie. So perhaps this could be the same marriage recorded in two parish records? I do not know if this was common or not and whether this could explain the discrepancy.

I had David Downie's parents as David Downie and Margaret Ogilvie. While I do not have any direct evidence that these are his parents, the Ogilvie name is carried through a couple of generations, the birth year was around right, and the birth was in Stirling, where the marriage could have taken place, or at least was recorded for David. Without confirmation, this should be listed simply as "possible". He said that if in fact this is the David Downie from Stirling, it's possible that his father, David Downie, was baptized there on 25 Oct 1761 to Robert Downie and Mary Ferguson.

Somehow I had missed that on the 1851 Scottish census, which I had seen, it listed Jean McMicken's birth place as Stranraer, Wigtownshire, Scotland. One suggestion was that because Jean's birthplace was Stranraer, and that Stranraer is the port in Scotland nearest to Ireland, and that her surname was McMicken, that she could have been of Irish origin. He also noted that the the different spellings of McMicken or McMeighan would be accounted for by English/Gaelic variations in spelling combined with the fact that Jean could well have not known how to read or write.

He also noted that on the 1851 census there a Barbra McMicken in Stranraer aged 90 (i.e. between 90 and 94 as ages in that Census were rounded down to the nearest five years) born Wigtownshire, with Eliza McMicken, aged 45 occupation Independent; the address is Neptune Street. Could this be Jean's mother and sister? Or another relative?

Finally, I shared with him text from a letter written by William Cuthbert, son of Thomas Cuthbert and Margaret Downie:

"The Cuthbert’s came down through the Highlander families of Downies and McMeighans. It is said that a great-great-great etc. grandmother ran away with the Earl of Early’s son, a Noble, and the old Earl never forgave him for it. The couple lived in the Highlands of Scotland. One of their daughters married a McMeighan and they had seven sons. The father was a Captain and owner of a small coastal sailing vessel. He decided to leave the Highlands about 1750 and placed his family – the great-great-great-grandmother and the seven sons – on board the vessel, and sailed down the west coast of Scotland.

This took several weeks, during which there was an awful storm, so the old Captain McMeighan put them down below for most of the voyage. He had two sailors and himself to man the ship. The storm was so bad that they had to nail down the hatches to keep water out, as the waves broke over the small ship. When the storm abated, the hatches were removed, the grandmother (the Captain’s wife, and a Downie) climbed the ladder to have a peek at the land close at hand. She noticed that the houses all had red roofs, (red tiles), which she thought was red straw. She explained to her husband, the Captain – “Look! Look! See the hooses aw thatched wi red straw!” He returned the exclamation by tell her – “Get down below ye blithering b—ch!” It would appear that the family eventually landed near Glasgow. This story has been handed down and told by the Downies in Boston and Providence.

The seven sons all became successful men in various parts of the world. One went to the West Indies and became a slave owner with a large sugar plantation. He never married, and when he died, the property and slaves were left to Marion’s grandfather Downie and his brothers and sisters – but none of them would claim the property, considering it “blood money”, on account of it having been made with slaves!

Another brother joined the British Navy. He was drowned at Portsmouth about 1780, while on the battleship “Royal George” that was sunk in the harbor one night with all on board – including some hundreds of rich men and women who were drinking and dancing when the ship went down. An account of this tragic even has been recorded in English History.

Another brother, John McMeighan, Marion’s maternal grandfather, went into ship building and was prosperous. He built a dock at Stranraer, south of Glasgow, and had something to do with the invention of the steam hammer. It is said that when he died, the property went into Chancery, as no legal heirs could be found. No doubt there were lots of them, but they failed to put in the proper claim."

He suggested that the Earl referred to could have been the Earl of Airlie, which is in Angus at the other side of Scotland. He also noted that "the story of the red tiles suggests that the voyage was down the East coast of Scotland as red tiles were brought over from Holland as ballast by ships from the East of Scotland ports in Angus and Fife, and 'pantiled' houses with red roofs are common on this side of the country, much less so in the West. See this very informative leaflet from Historic Scotland: http://www.historic-scotland.gov.uk/informguide-pantiles.pdf. The houses shown on the leaflet with the stepped gables are almost certainly from East Fife, where my Downies came from."

Interestingly, even though the story suggests that the wife of Captain McMeighan (McMicken) was a Downie, if indeed that wife did descend from the Earls of Airlie, her name would have been Ogivly. So perhaps this was the Ogilvie connection in the family? Who knows. It makes for interesting family lore at least.

He also mentioned that "one member of the Ogilvy family, John Ogilvie, now know as Saint John Ogilvie after being canonised in 1976 was a Jesuit priest who was hanged for his beliefs in Glasgow in 1615. Making a connection with your family may be difficult!" Indeed. 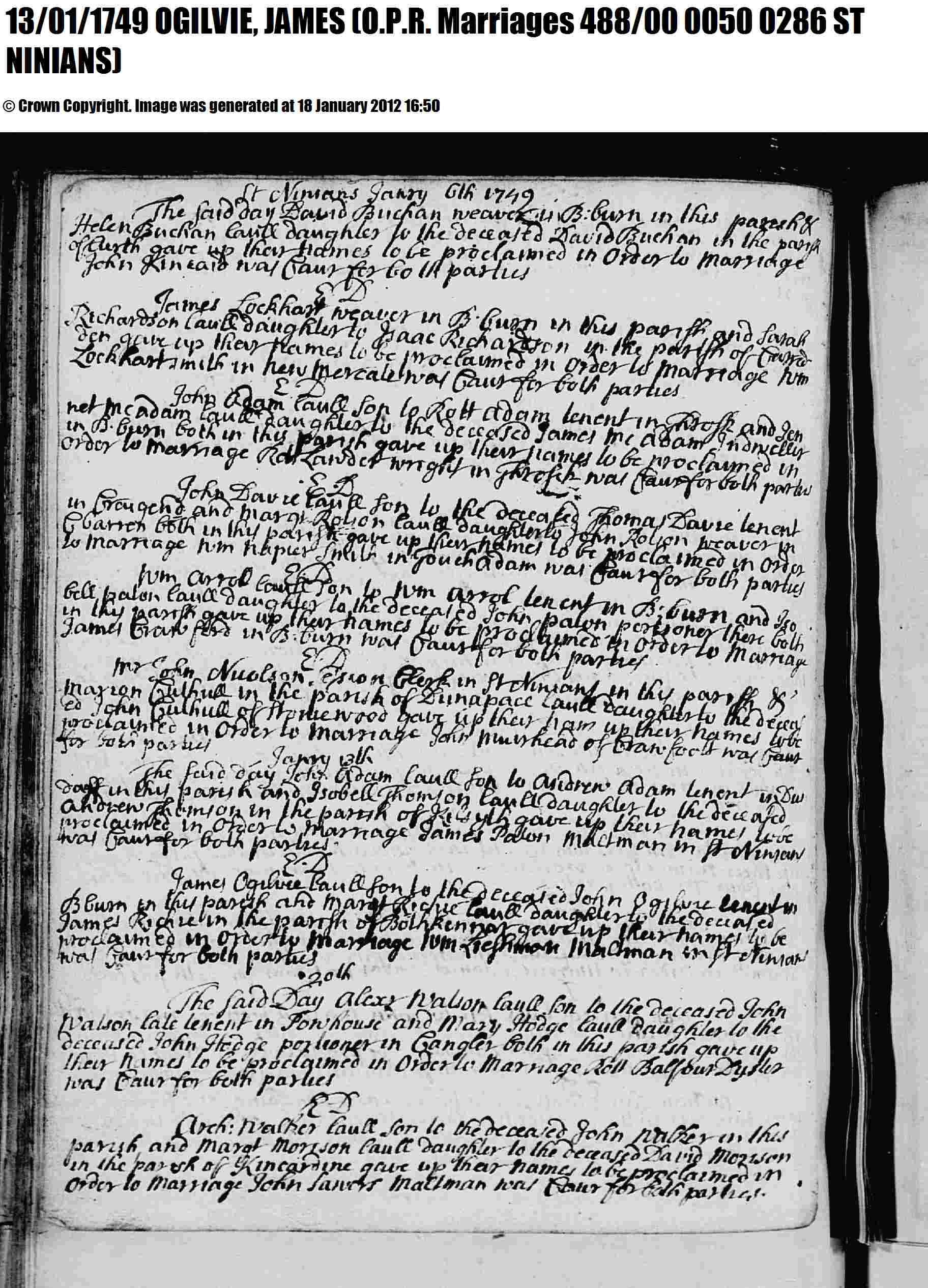 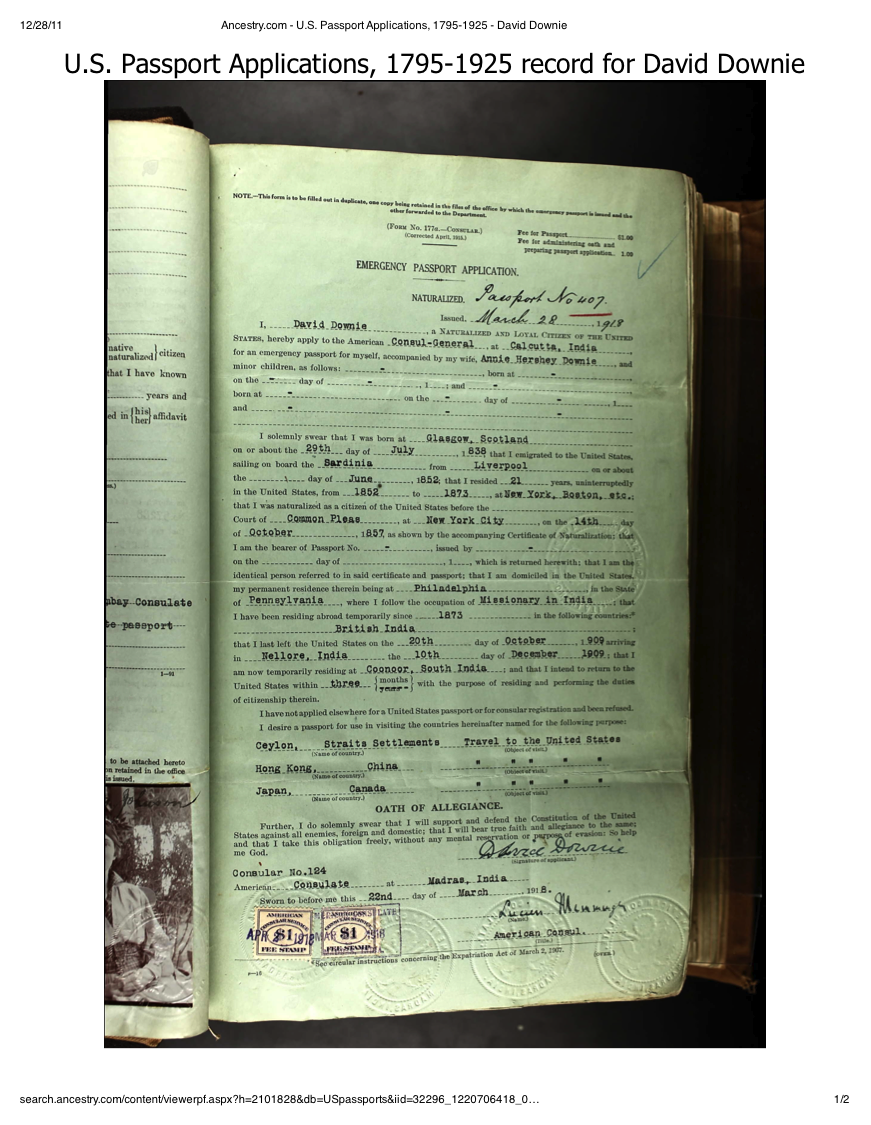 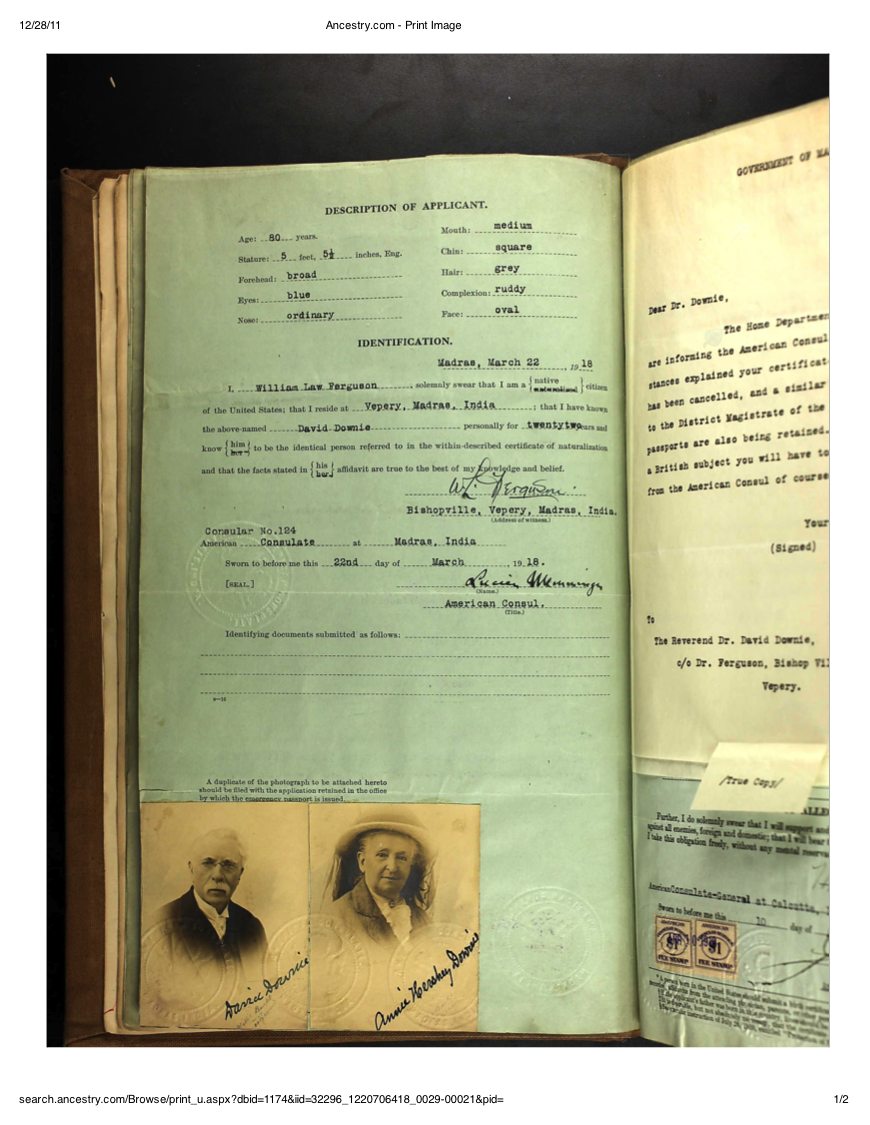 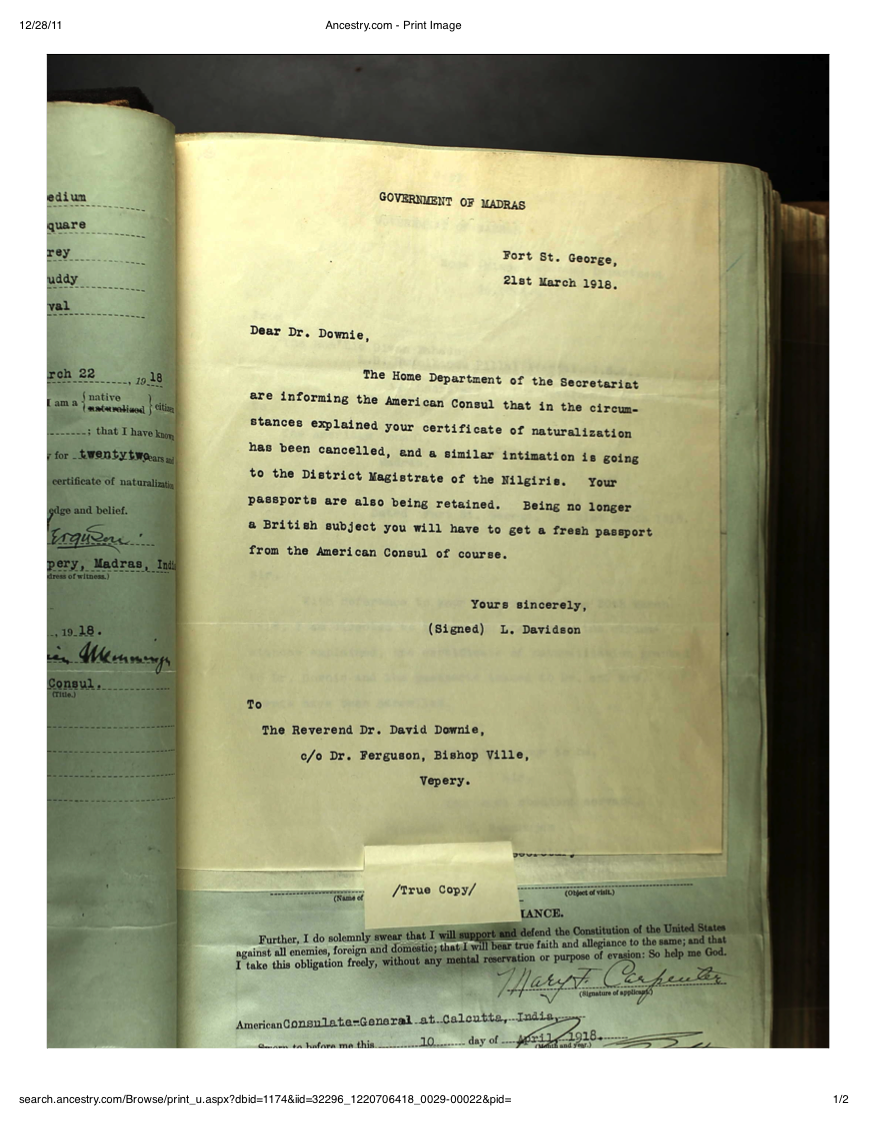 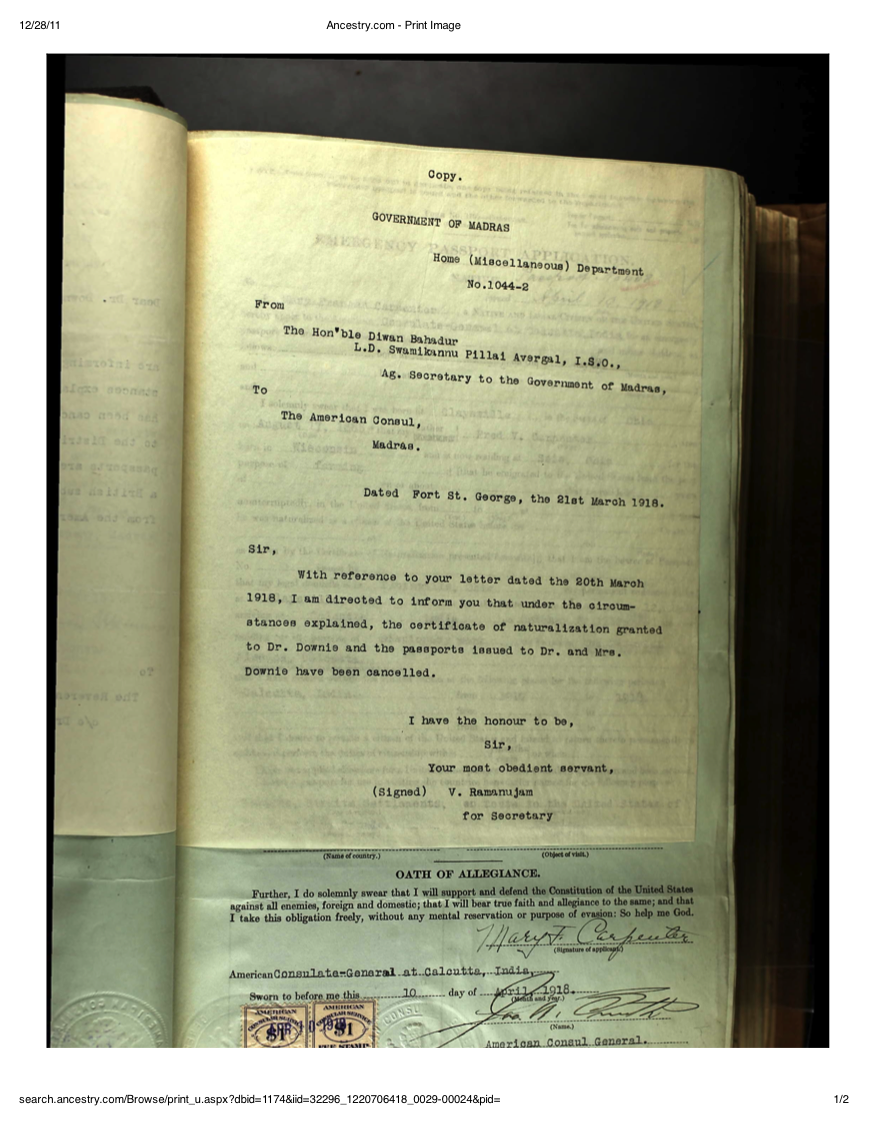