Finally, we received signed, certified, and apostilled background checks from Indiana. It only took 3-4 tries, several letters, and a few phone conversations.

New York State should arrive later this week. FBI said that it was in process and should be finalized soon.

Today I called the NY Secretary of State's office. They confirmed that if I can get signatures on the criminal background check by the director of assistant director of DCJS (Joseph Morrissey or Donna Call) they can apostille the document. Today I spoke to DCJS and they will be issuing new background checks with one of those signatures.

Several weeks ago, I wrote Montemaggiore Belsito, Sicily, to see if they could send me some information about my great-grandfather's siblings who stayed back in Sicily. 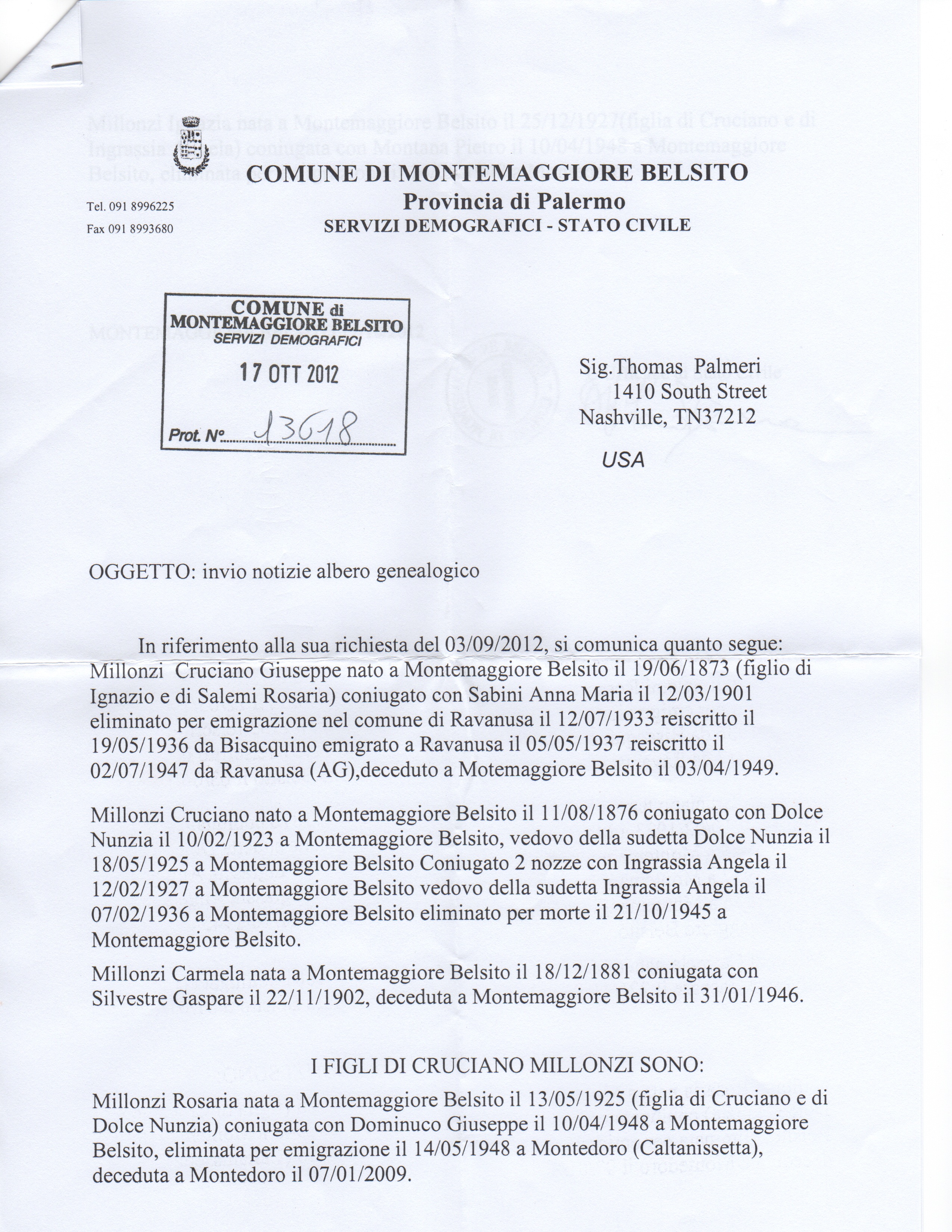 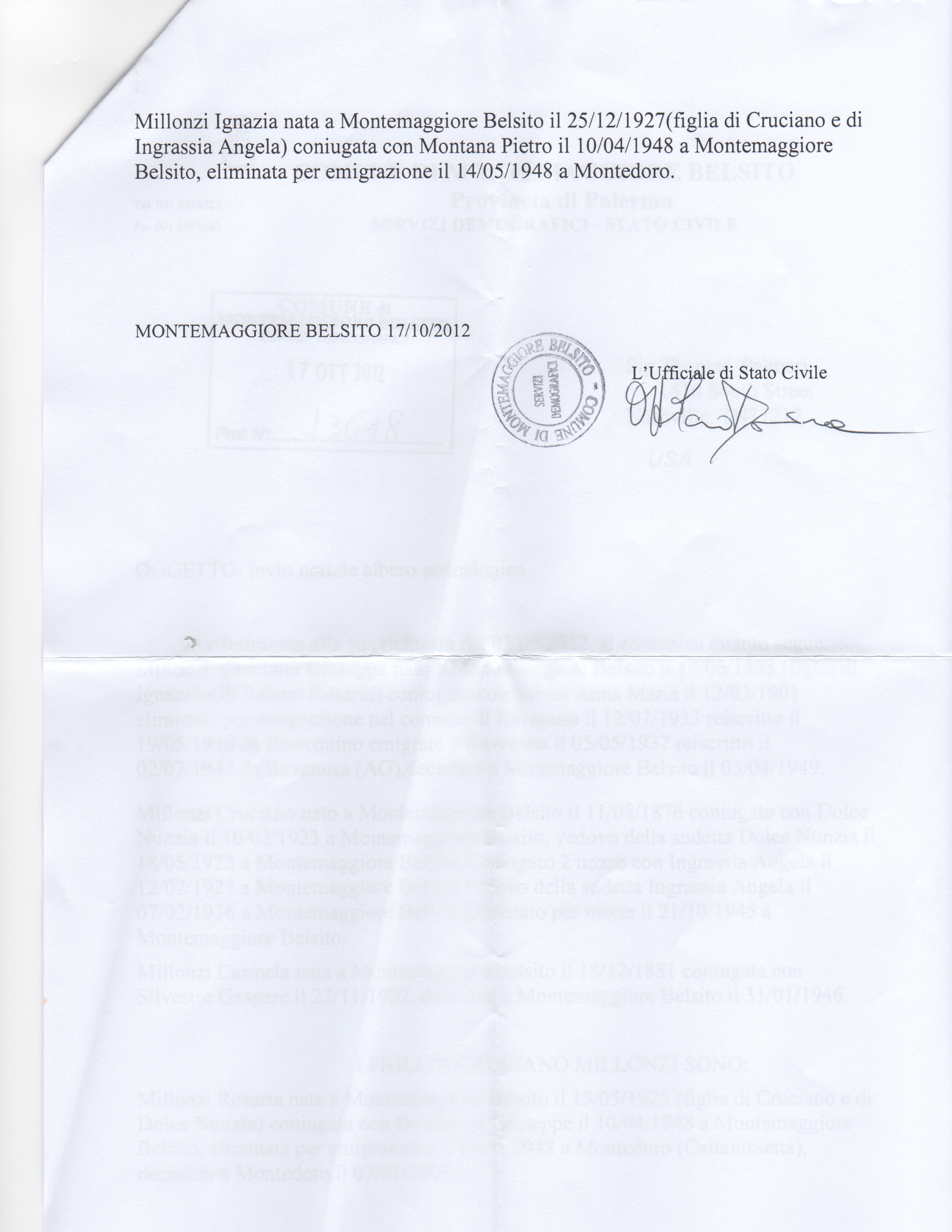 One state down, two states and the FBI to go. Tenneessee background checks arrived today, apostilled.

This confirm that he was in the Battle of Gettysburg, company D of the 150th Pennsylvania Volunteers.

"In the 150th Regiment of Pennsylvania Volunteers, company D, commanded by H.W. Crozer. Honorably discharged on 26 Aug 1865. That while in the service aforesaid, and in the line of duty he on the first day of July 1863 while engaged in action at Gettysburg, PA received a gunshot wound in the leg, about two inches above ankle thereby disabling him from duty, that by reason of the effects of said wound he is unable to attend to his occupation which is that of shoeing horses … and that he was wounded at the Battle of Gettysburg as aforesaid was treated at the hospital there, transferred to Hospital of York Pennsylvania on the 20th of July 1863 remained there until ordered …"

Today, the consulate in Detroit called to set up our appointments to receive our Italian passports. Never thought this day would come.

Unfortunately, even though I asked for the background check to be listed in my wife's married name and maiden name, they only came in her married name. Since she never used that name while living in NY, that could be a problem for the consulate or for Rome. So I sent a letter thanking them for sending the notarized background check but asking for another one in her maiden name.

One was from the Indiana State Police, returning our request for the background check to be notarized. They said they tried to contact us, but Amy didn't say she got a call from them.

The other was from Safran, who digitized her finger prints. We asked for them to forward the request to the Indiana State Police. They sent it back to us.

Ugh. This is frustrating! I'll be responding to both. Again!

We sent the TN criminal background checks to the TN Secretary of State. They were returned. First, because I forgot to include the check. Duh. But also because the notary needs to be verified by the Davidson County Clerk's office first. Ugh. Round 27.

My brother wishes to apply for Italian dual citizenship. He lives out west, so he would apply through the San Francisco consulate. Their web site says this:

As of 10 October 2012, in accordance with memoranda issued by the Ministero degli Affari Esteri (MAE), this Consulate will no longer refer to the files of other Consulates or Comuni (municipalities) in Italy. Therefore, if you are applying after a family member has already received recognition of citizenship by descent from the same ancestor, you will be required to present all family documents from scratch, either in original from the relevant U.S. agencies, or as copie conforme (authenticated photocopies) issued by the Consulate or Comune which recognized your family member’s citizenship. The latter method is generally recommended and faster, but incurs a fee.

Today I emailed the Detroit consulate to ask what the procedure would be for me to obtain a cope confirme of my application materials for him to use in San Francisco. The birth certificates for my grandfather and mother were the only ones our family had. To get new copies would require a court order because NY State will not release a birth certificate to anyone but the person named or their parents.

17 Oct 2012
Response from the consulate: Your brother must contact our Consulate in San Francisco, we have new regulations.

Corrected Tennessee background checks arrive today and will be sent out for apostilles. 1 state down, 2 states and the FBI to go.

Yesterday, Indiana said that they were getting signatures and apostilles applied to those background checks.

Well, the NY State background checks arrived today. Despite noting that they needed to be suitable for apostille, both in the cover letter and on the application, they arrived unsigned. We're sending them off the the NY Secretary of State with a letter asking if they can apostille them and if not to please either call the NY State Police or send us a letter with clear instructions as to what they need in order to apostille a documents. It appears that writing in every possible margin of a form is not enough for people to issue signed background checks. Only TN sent them right (well, except for a spelling mistake).

Background checks from TBI arrived today. Everything was perfect – signatures, seals, notarized statement – except that they spelled my wife's name wrong on the address lines (Palmer instead of Palmeri). So we sent them a letter asking them to correct and resend.

The background check arrived today from Indiana. All it says is "A thorough search of our files by NAME, DATE OF BIRTH, SEX, RACE, and FINGERPRINTS DOES not reveal a criminal history record …"

I forwarded it on to the Indiana Secretary of State for an apostille, which fortunately is free (unlike most states).