Another copy of the NY background check with an apostille arrived today. I think someone from the NY Secretary of State's office must have gotten the background check notarized and then they apostilled it and returned it. Very nice.

In addition, the FBI background check came today. Send it off for an apostille by the Department of State in DC.

Finally, the NY Background Check arrived in the mail. Well, actually what they sent was a signed and certified letter saying that what I received before was all I would receive. So I attached that letter to the check. Mailing the combined off for an apostille by NY.

Finally, we received signed, certified, and apostilled background checks from Indiana. It only took 3-4 tries, several letters, and a few phone conversations.

New York State should arrive later this week. FBI said that it was in process and should be finalized soon.

Unfortunately, even though I asked for the background check to be listed in my wife's married name and maiden name, they only came in her married name. Since she never used that name while living in NY, that could be a problem for the consulate or for Rome. So I sent a letter thanking them for sending the notarized background check but asking for another one in her maiden name.

One was from the Indiana State Police, returning our request for the background check to be notarized. They said they tried to contact us, but Amy didn't say she got a call from them.

The other was from Safran, who digitized her finger prints. We asked for them to forward the request to the Indiana State Police. They sent it back to us.

Ugh. This is frustrating! I'll be responding to both. Again!

We sent the TN criminal background checks to the TN Secretary of State. They were returned. First, because I forgot to include the check. Duh. But also because the notary needs to be verified by the Davidson County Clerk's office first. Ugh. Round 27.

Corrected Tennessee background checks arrive today and will be sent out for apostilles. 1 state down, 2 states and the FBI to go.

Yesterday, Indiana said that they were getting signatures and apostilles applied to those background checks.

The background check arrived today from Indiana. All it says is "A thorough search of our files by NAME, DATE OF BIRTH, SEX, RACE, and FINGERPRINTS DOES not reveal a criminal history record …"

I forwarded it on to the Indiana Secretary of State for an apostille, which fortunately is free (unlike most states).

My aunt had found what looked to be official birth and death certificates for my grandfather, Joseph Palmeri. I wasn't sure if they were indeed official and if they could be apostilled. Today I got them back in the mail. 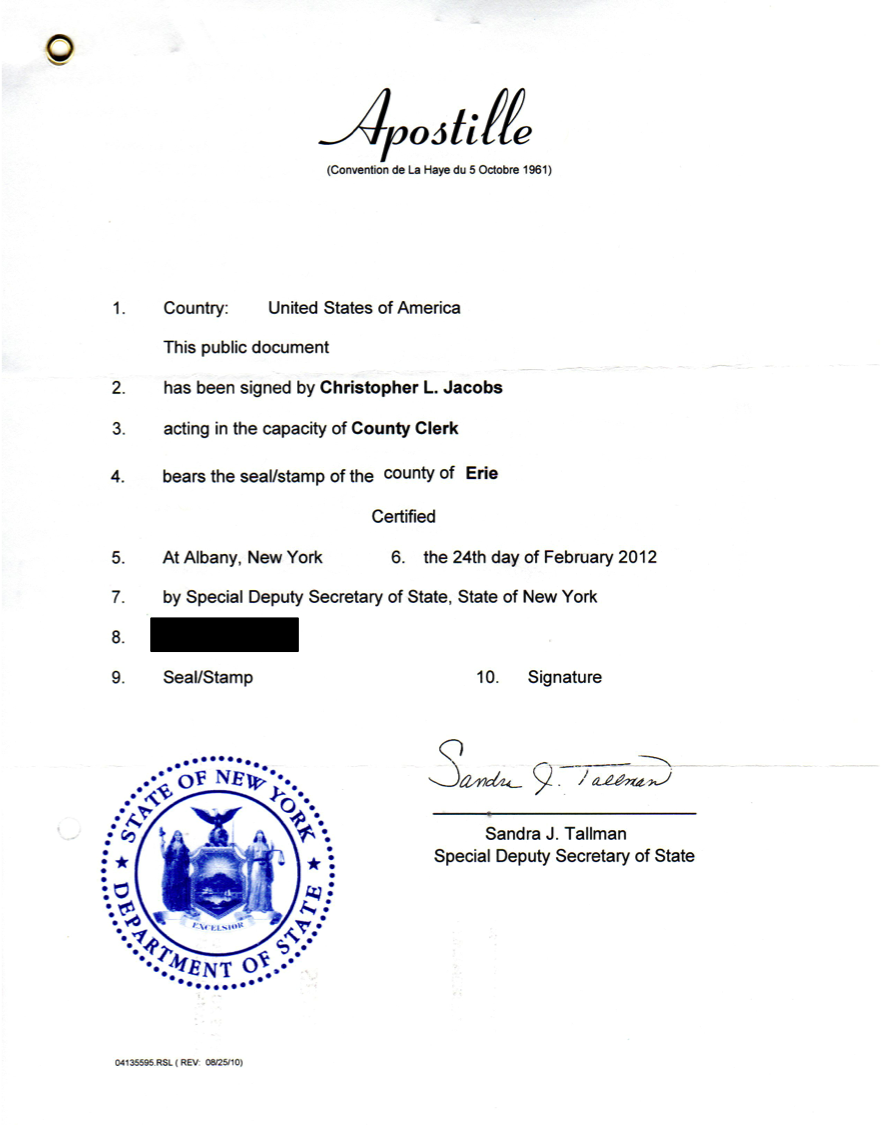 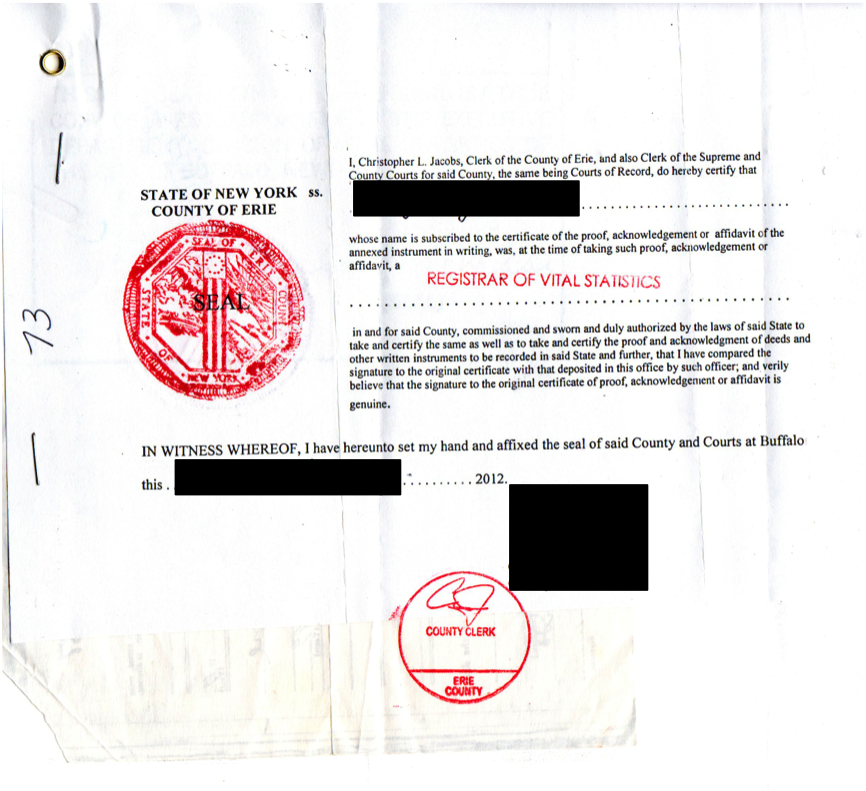 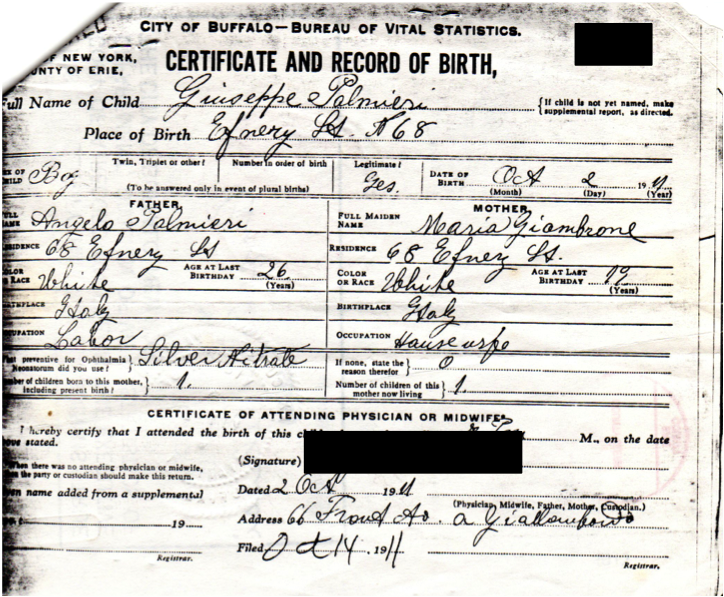 apostille for my grandfather's birth certificate 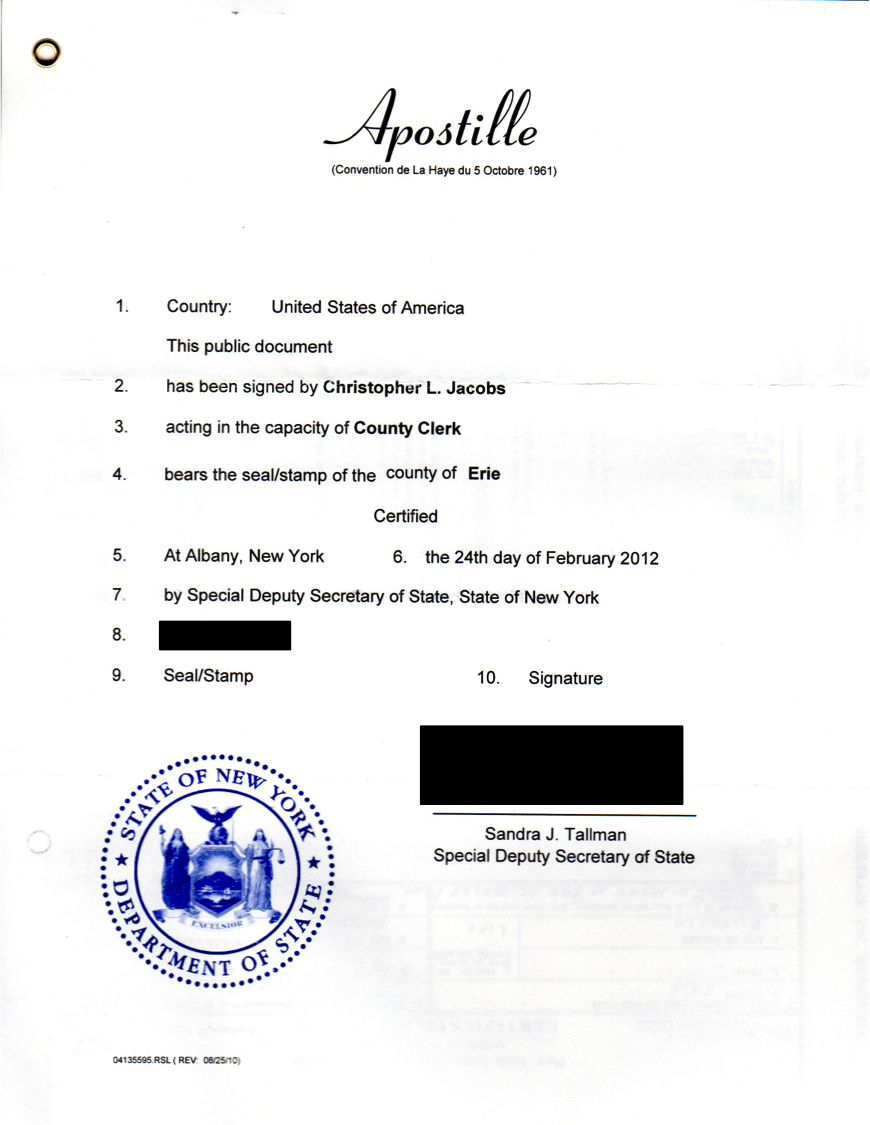 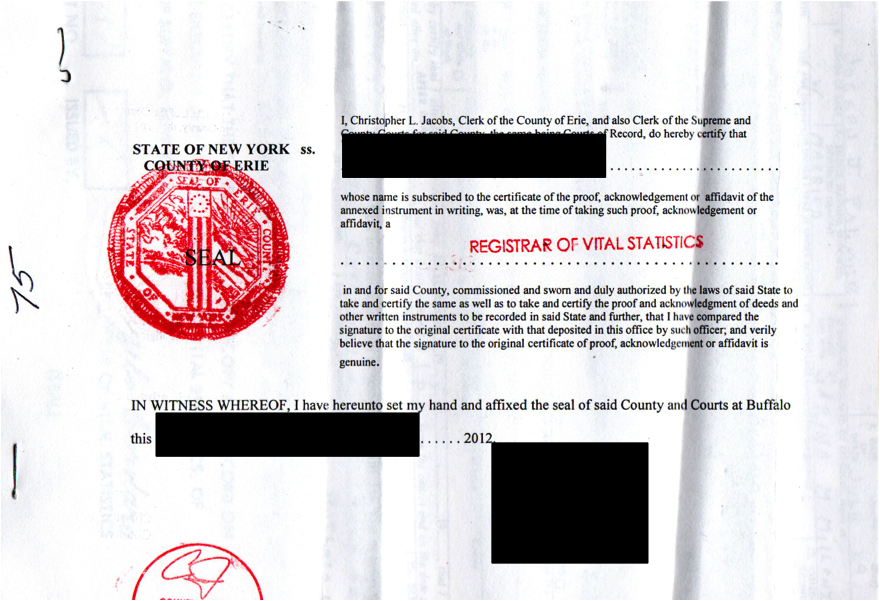 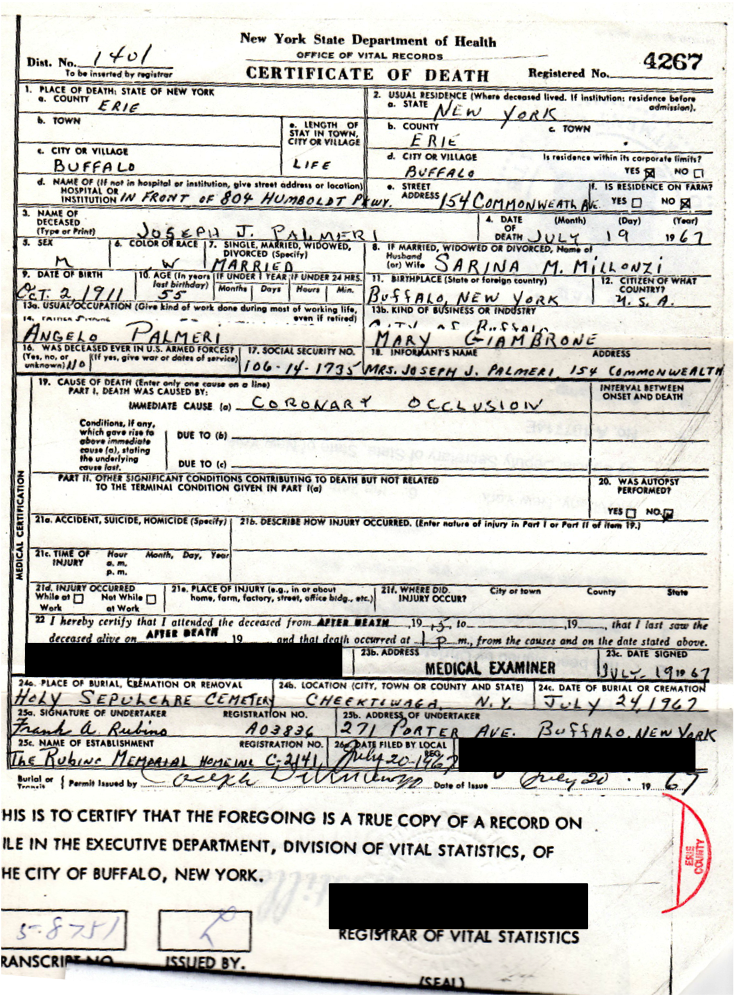 apostille for my grandfather's death certificate

Today we finally received apostilles for our birth certificates from NY State. Another category nearly complete. Just need to get these translated. 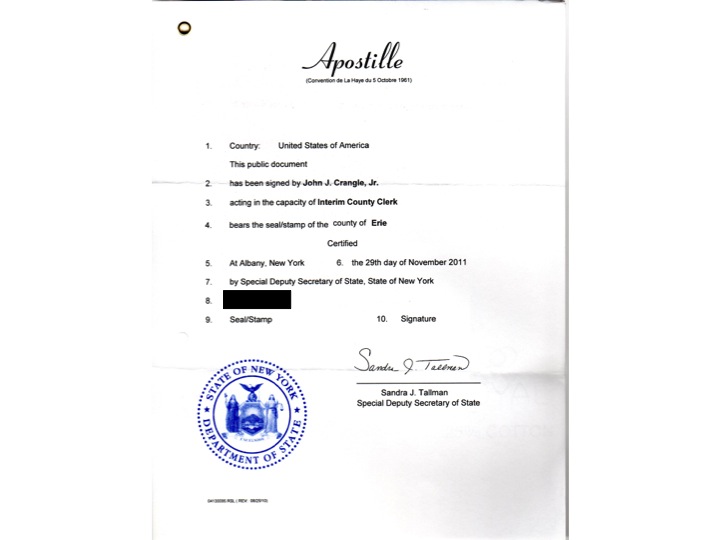 apostille for my birth certificate

They were returned today. Even though these are official birth certificates, with signatures and a raised seal, from the City of Buffalo, in order to get apostilled, they need to also be certified by the Erie County Clerk.

Glad we're not under any time constraint.

Found out how to request that our birth certificates be signed and certified by the Erie County Clerk. Cost: $3 a piece. Include a SASE. Mail to:
Erie County Clerk
Attn: Customer Service
92 Franklin Street
Buffalo, NY 14202

This may be the easiest step in our journey to dual citizenship.

They each also need something called an Apostille from the Secretary of State of the state in which they were issued. According to Wikipedia, "The Hague Convention Abolishing the Requirement for Legalisation for Foreign Public Documents, the Apostille convention or the Apostille treaty is an international treaty drafted by the Hague Conference on Private International Law. It specifies the modalities through which a document issued in one of the signatory countries can be certified for legal purposes in all the other signatory states. Such a certification is called an apostille (French: certification). It is an international certification comparable to a notarisation in domestic law."

Our children were born in Nashville, so that means the Tennessee Secretary of State. Since Nashville is the state capitol, that just meant going downtown to the Department of State in the Snodgrass Tower and going to the 6th Floor.

This may be the cheapest step in our journey as well. It only cost $2 each to get an apostille affixed to each of their birth certificates.

Later, we will need to get the certificates translated as well, but we'll wait to do that when we have all of the documents in hand. 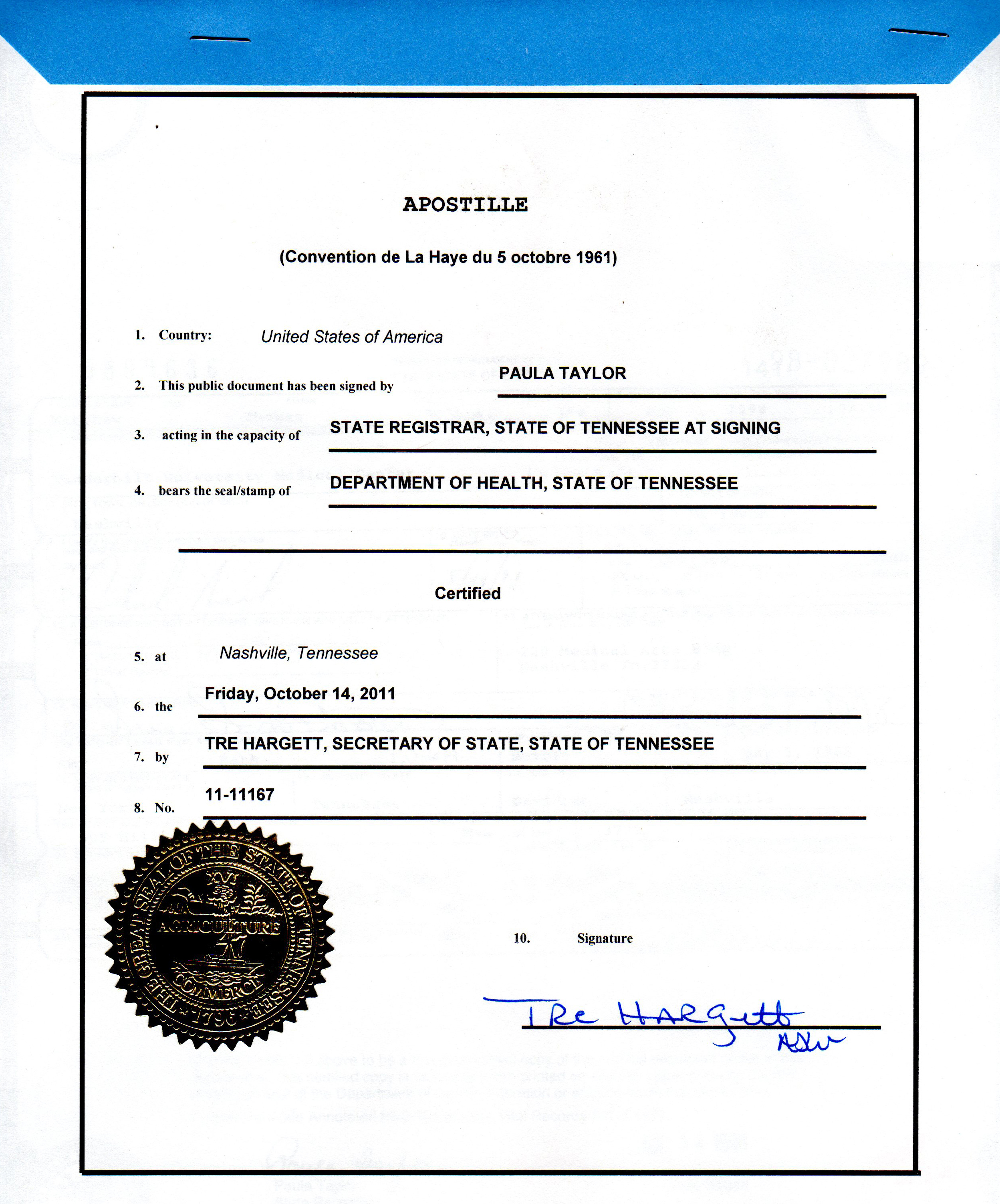 apostille affixed to a birth certificate