I requested official certified copies of the 1900, 1910, and 1920 US census showing my great-grandfather, Angelo Palmeri. They arrived today. The 1910 is from Pennsylvania, where he and his brothers were coal minres. The 1920 and 1930 are from Buffalo.

Now if they could send me something on his naturalization, I'd be happy. 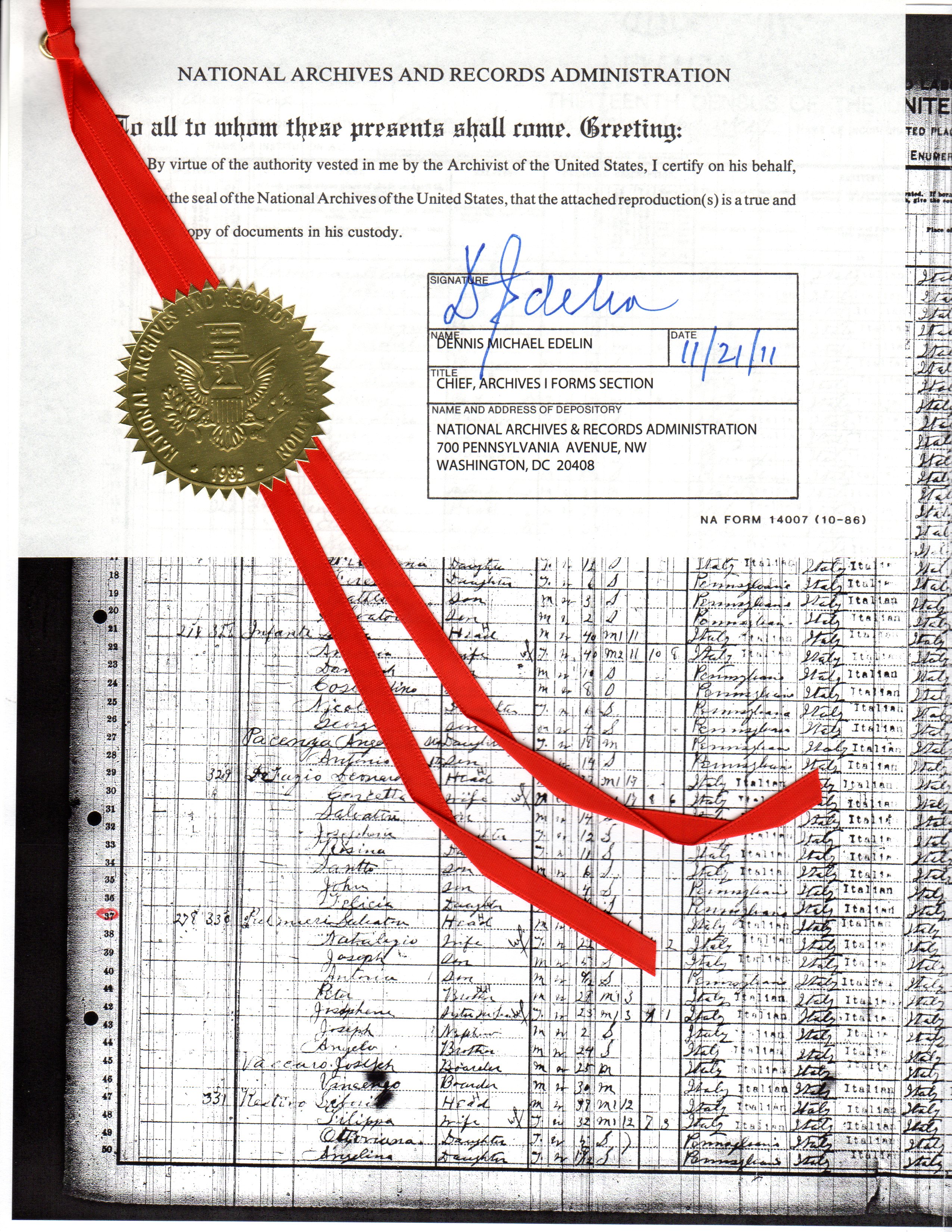 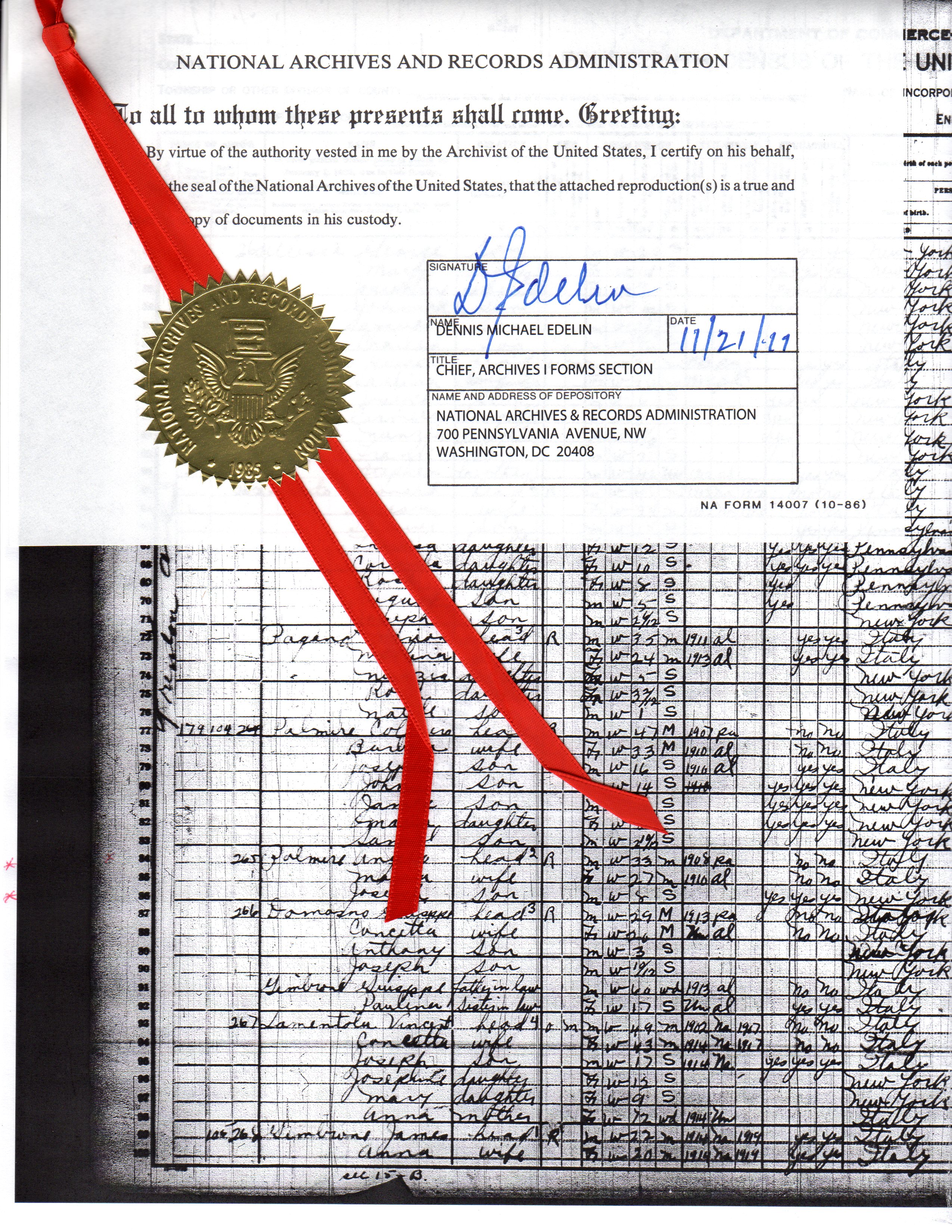 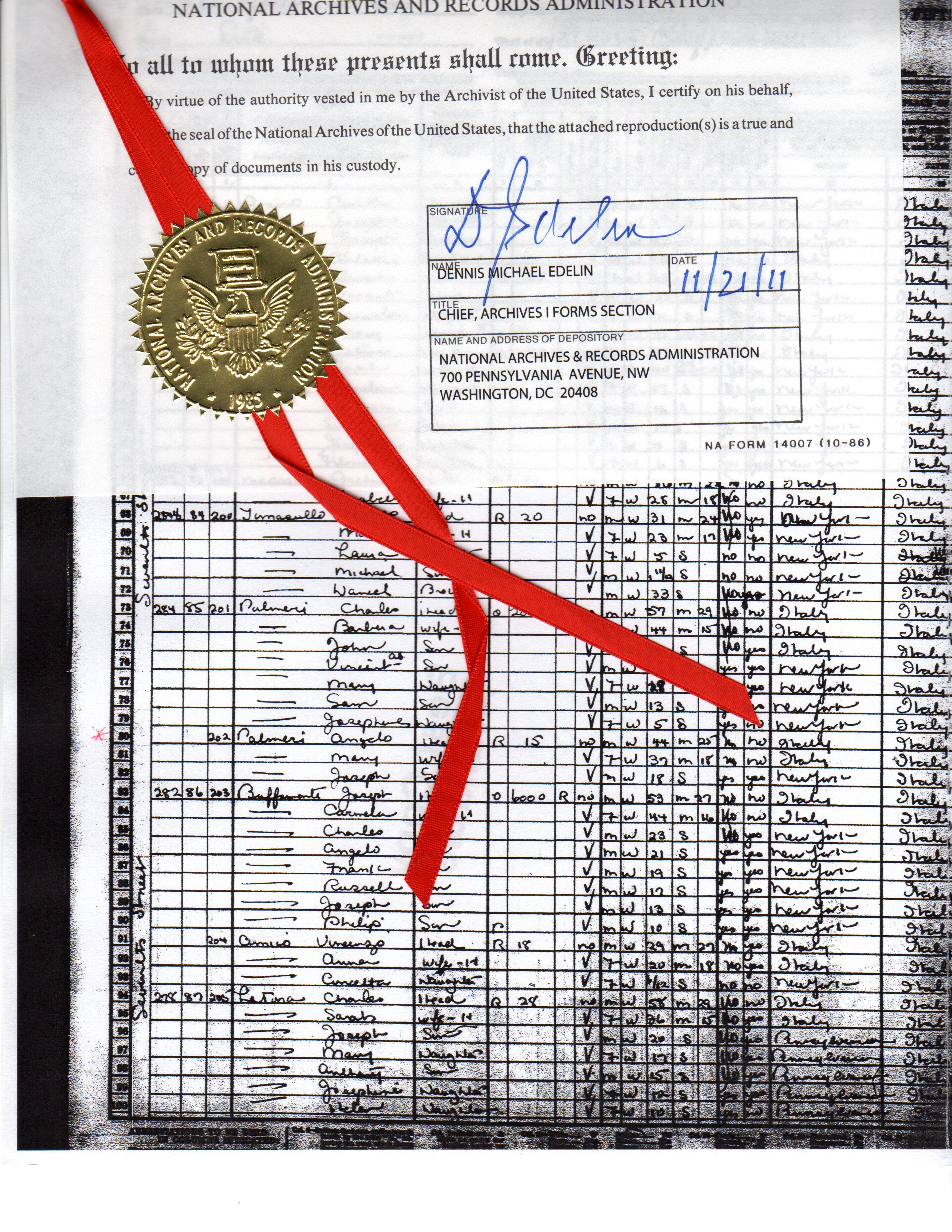 Given that I struck out in my search of the U.S. Citizenship and Immigration Service, I need to do a search of the National Archives and I need to order certified paper copies of census records and immigration records for my great-grandfather.

You'll need to set up an account to place an order. After that:
– Click on Order Reproductions.
– Click on Census Pages (bottom left quadrant, first entry).
– Click on NATF 82: Census Records (NATF 82).
– Be sure to choose Certified Paper Copy from the Delivery Format dropdown menu.
– Complete your order.

1) NARA Search for Naturalization Record for Angelo Palmeri $7.50 plus $15 for certified paper copy.

As I noted in a recent post, it looks like my great-grandfather, Angelo Palmeri, came to the US through Ellis Island in 1909 with his sister-in-law, Giuseppa (Baglio) Palmeri, and his nephew, Giuseppe Palmeri. The manifest says that all three were going to join Pietro Palmeri in Yatesboro, Pennsylvania. I originally thought that was simply an error, or that it could be the wrong Palmeri family entirely. But then I found census records for Pietro and Salvatore Palmeri in Buffalo that note that some of their children were born in Pennsylvania as well as Italy and Buffalo.

I've now confirmed from marriage records from Serradifalco that this was indeed my great-grandfather, Angelo, traveling with his brother Pietro's wife, Giuseppa (Baglio) Palmeri.

A new search on familysearch.org turned up Palmeris in Pennsylvania in the 1910 census in Cowanshannock, Armstrong, Pennsylvania, right outside of Yatesboro.

That's coal country and Salvatore, Pietro, and Angelo all list themselves as coal miners. Serradifalco was a major sulfur mining area in Sicily for many many years. Indeed, some of the oldest mines in Sicily are near Serradifalco. As such, many immigrants from Serradifalco came to work in the mining industry in the US. It appears that three of the Palmeri brothers did for a time. Angelo went to Buffalo the next year to marry Maria Giambrone in 1910. It seems that Pietro and Salvatore went to Buffalo a few years later, probably around 1913 or 1914 based on when various children were born in Pennsylvania or New York.

I found some things online that indicated that Yatesboro had coal mines in the early 1900s that were run by the Cowanshannock Coal Company. I found this web site on the early history of Yatesboro at http://www.saintmaryyatesboro.org/history.html:

Until the turn of the Nineteenth Century, Cowenshannock Township was sparsely populated rolling farmland with no Catholic church. However, the discovery of abundant coal seams in the hills surrounding Rural Valley heralded the opening of coal mines and an exciting new era of change began in the valley.

In March, 1899, Lucious Waterman Robinson, president of the Commonwealth Coal and Coke Company, a subsidiary of the Rochester and Pittsburgh Coal and Iron Company, purchased 1000 acres of farmland from millionaire capitalist Adrian Iselan. Robinson’s intention was to open a coal mine, to erect mine buildings and build a company town for his employees. He named the town Yatesboro after Arthur G. Yates, president of the Buffalo, Rochester and Pittsburgh Railroad (BR&P).

The rich veins of coal turned out to be very productive and, by 1901, Commonwealth Coal employed 400 men in the Yatesboro mines. By 1913, the number of miners soared to 1075 men who mined more than 825,000 tons of coal yearly. In the early years of production, nearly all of the coal from the Yatesboro mines was sold to George Eastman (the famous camera magnate) who used it to heat his Eastman Kodak laboratories in Rochester, New York. Mr. Eastman and Mr. Robinson were quite good friends and next door neighbors in Rochester.

With the opening of the mines, immigrants from Europe began to flood into the area to seek their fortune. Many Italians, Scotch, Swedes, and middle Europeans such as Poles and Czechoslovakians left their homelands to seek the riches promised in America. Not sure what they would find in this new land, many left their families behind in Europe. (The coal company especially encouraged married men to work in the mines as they represented a more stable workforce.) Coming by train straight from New York to Yatesboro, most of the immigrants boarded in the company-owned Valley Hotel until the company built the planned two hundred and fifty single and double houses that would allowed the miners to send for their families.

Eventually, Commonwealth Coal and Coke was operating five mines in Yatesboro and the company town grew to include a company-owned store (The Valley Supply), a fine hotel, a pool hall as well as a school (grades 1 – 10) and churches.

Many of the European immigrants brought with them their strong Catholic faith and traditions which were a central part of their lives in their homelands. With no church within walking distance, Roman and Greek Catholics began to congregate at Peter Mann’s Hall where the Lutherans also held their Sunday services. (Peter Mann’s Hall was a social hall and pool room located on the site of the present day William Penn club on Main Street, Rural Valley). It was at Peter Mann’s Hall, on August 15, 1901, the Feast of the Assumption, that Father John DeVille, a priest from Saint Anthony’s Church in Walston, Jefferson County (Diocese of Erie) gathered the Catholics together to celebrate their first Mass. 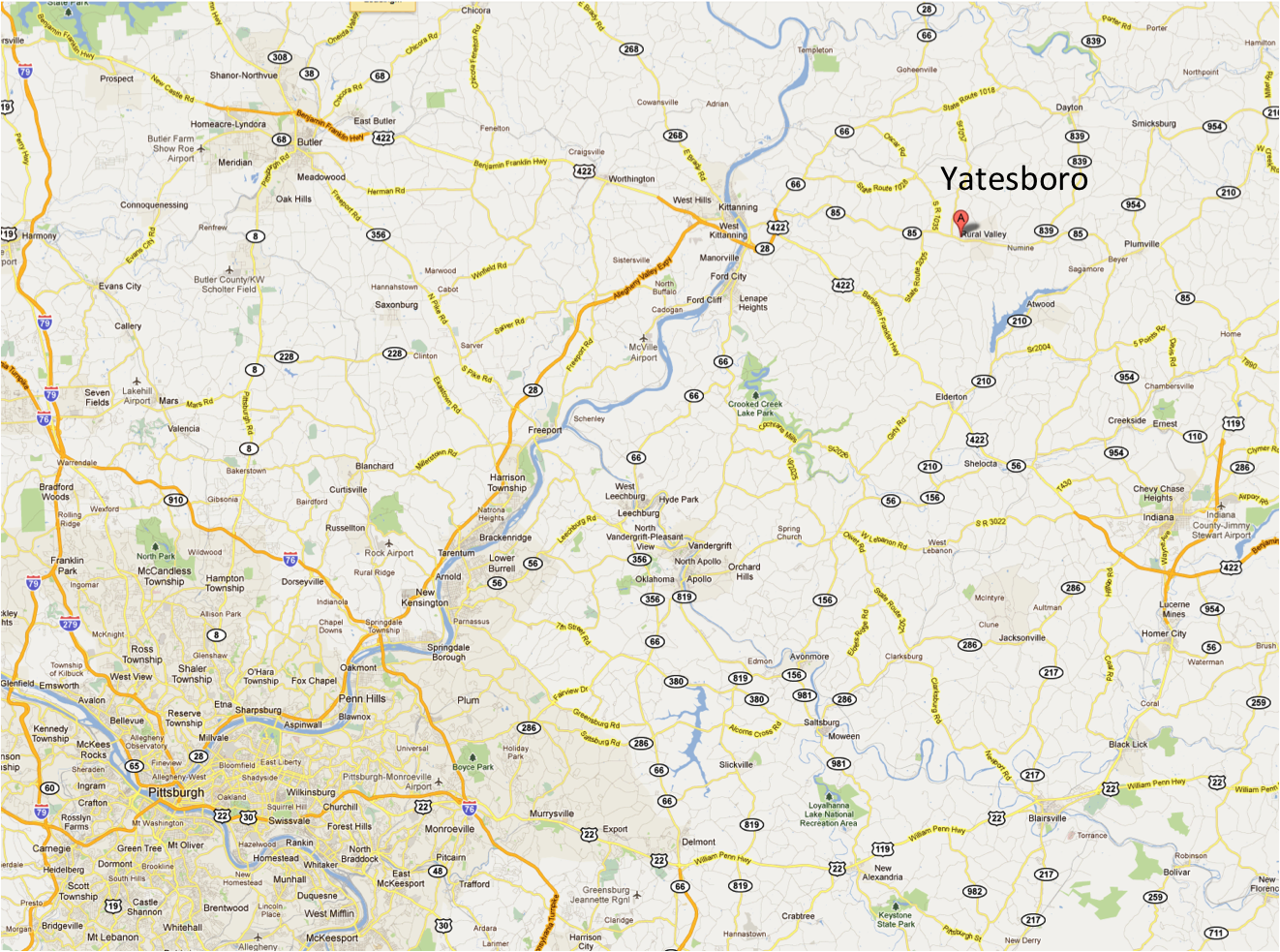