So I knew my great-grandfather’s name, but little else.

All that my father knew was that the Palmeri family came from a small town in Sicily where most of the men were sulfur miners. He thought the name was something like “saltadifarco”. Needless to say, a Google search on that name brought up nothing. But with a little more searching on Google maps and Wikipedia, I reasoned out that they probably came from Serradifalco, a small town in the providence of Caltanissetta in Sicily, where sulfur mining and farming were the most prevalent occupations. I wasn’t certain. But it seemed a good bet. 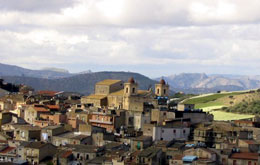