Monsignor Mercurio Maria Teresi was born in Montemaggiore in 1742 and is somewhere in the early stages of being considered for sainthood by the Catholic church. My great-grandfather Rosario Millonzi's grandmother was a Filippa Teresi born in 1813. We could be related to a future saint.

We learned this visiting Montemaggiore Belsito, home town of Rosario Millonzi, my great-grandfather, and Carmela Parisi, my great-grandmother. My grandmother and my uncle were also born there soon before they all emigrated to the US in 1920.

According to http://www.monsignorteresi.it, with the help of google translate, he was born 10 October 1742 to Cruciano Teresi and Margaret De Nasca in Montemaggiore Belsito. Two of his uncles, Don Antonio and Don Philip Teresi, were priests. He apparently showed singular piety, but was denied study to the priesthood because he seemed dull of mind. But after constant prayer before the statue of Our Lady, it was said that she laid her hand on the back of his head and he received such an intellect that at 18 years of age he had written his first work on the Immacolate Conception of Mary, followed from another book written at 20 years of age. He undertook and completed his studies in theology at the Jesuit Collegio Massimo of Palermo. In April 1765 he was ordained priest by the Bishop of Cefalu and immediately returned to the diocese and was appointed Spiritual Director and Professor of Moral Theology at the Episcopal Seminary of Cefalu. Two years later he left the Chair and the seminary to pursue priesthood with all the enthusiasm to the Saints missions. He spent nearly forty years of his life evangelizing the vast Diocese of Sicily. First he went to Nicosia, where he stayed for a whole month, then reached Mazzarino, Newfoundland, Sperlinga, Palermo, Messina, Catania, Siracusa, Agrigento, Mazara, Monreale, Palermo, etc.. He paid this feat with great sacrifices, hardships, dangers and misunderstandings of all kinds. Although overwhelmed by the apostolic work, he learned the value of spare time in order to write and publish various works of a theological, ascetics, enriched by historical thoughts and lessons learned from the Fathers and Doctors of the Church and the texts of Sacred Scripture. In 1797 he was appointed parish priest of Montemaggiore Belsito for about 5 years. The fame of sanctity reached the ears of King Ferdinand III of Bourbon and his wife Queen Caroline who wanted him to attend their court as a preacher and confessor, recognizing in him the man of God who spread the word and works with the "bonus odor Christi ". Ferdinand III was captivated by his words and example of his life. Bishop Teresi, spiritually linked by a great affection to the Society of Jesus, said the return of the Jesuits in Sicily and also the restoration of the Archdiocese of Monreale, abolished in 1775. Both the favors were granted in 1803 and in obedience to the Pope and the King accepted the post of bishop of Monreale. Although the charge did not alter his style of apostolic life, continuing to favor the poor. He led with firmness and gentleness, the archdiocese and died April 18, 1805 in Monreale. Tradition says that in the same hour in which he died (the 2 am) the bells of the parish church of Montemaggiore Belsito, which he had raised to a minor basilica, gave themselves the announcement of his death. "The fame of holiness of Mary Teresi Mercury" as said by Pope Pius XI in the Papal Bull with which raised the Monreale Cathedral Basilica Minore 28 August 1926 "in recent times has increased and extended everywhere." 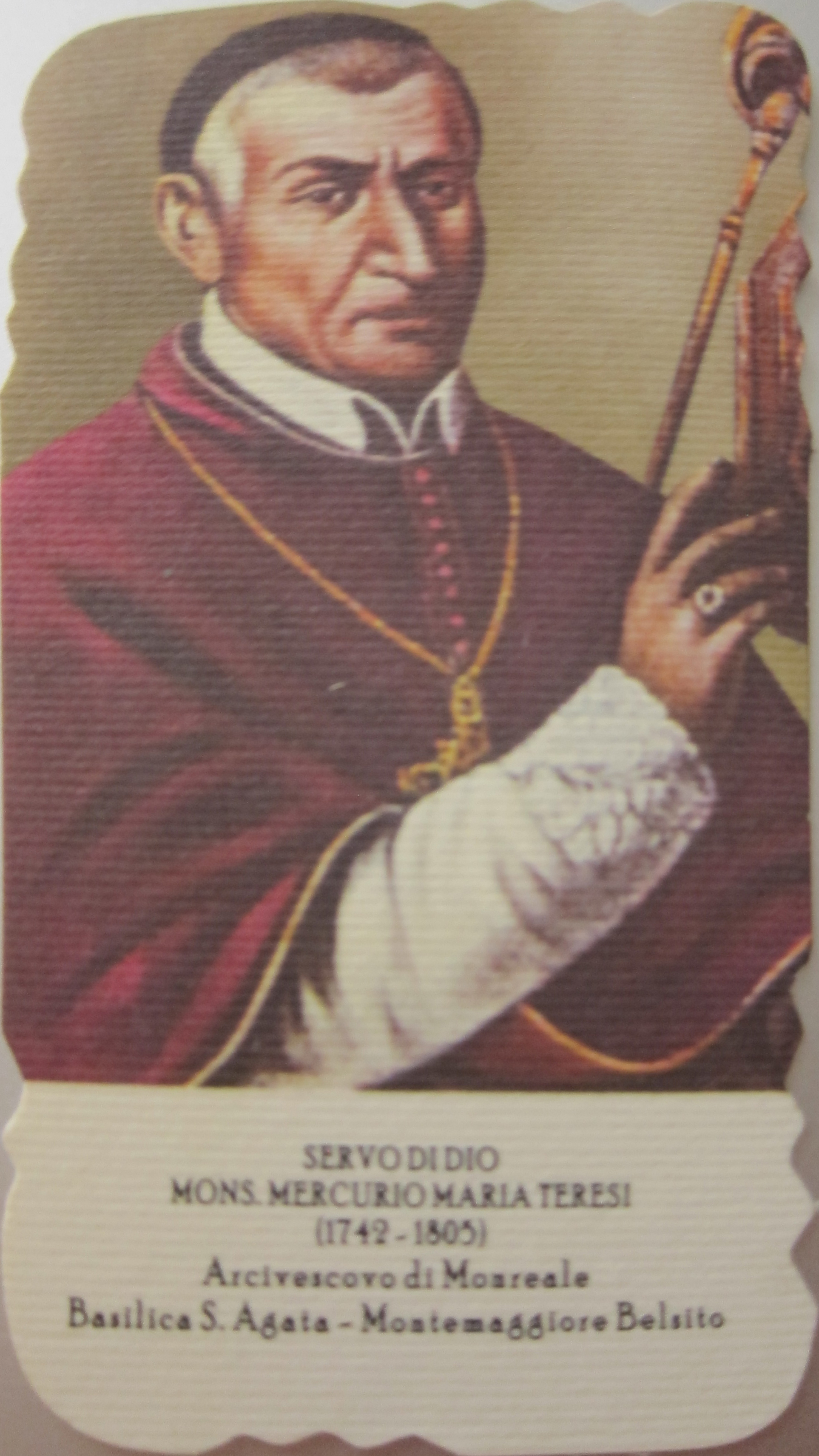